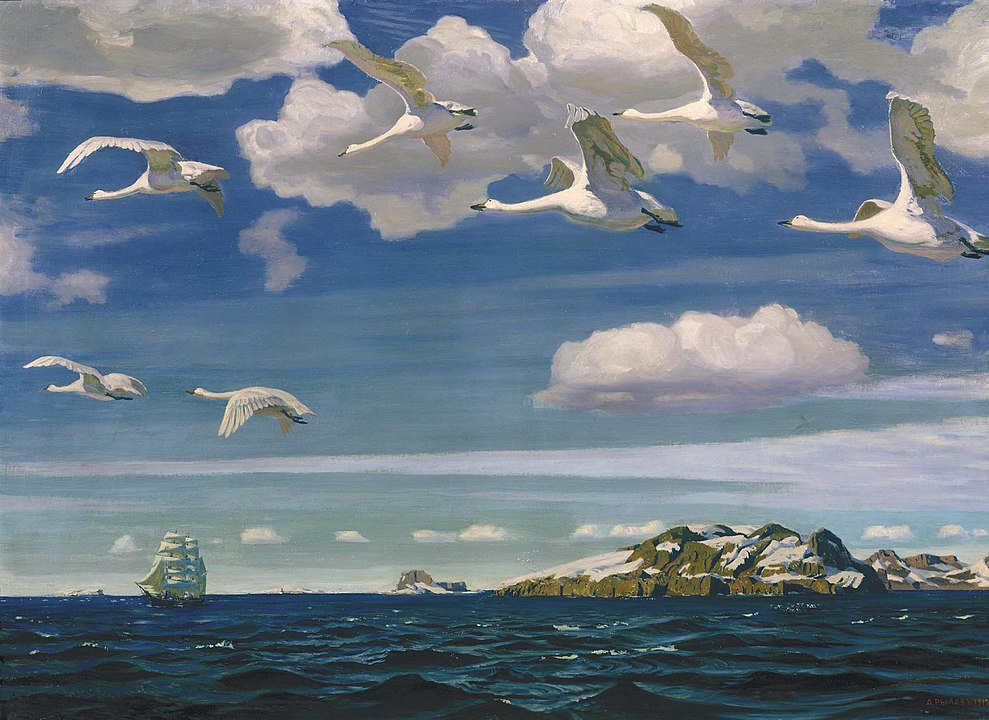 Arkady Rylov and His Broad Expanse

By Natalia UsanovaNovember 5, 2020No Comments

Several recent posts on my blog are quite long and serious. I wanted my new entry to be light. I decided to write about a landscape that radiates joy, started to read the remembrances of the artist who created the painting, and…

Sorry, my friends. Here is another long serious essay – a biography rather than a description of a particular work.

A Pupil of a Wizard

Arkady Rylov was born in 1870, in the Vyatka Governorate of the Russian Empire. He grew up as a common country lad – walking in the forest, swimming in the river.

Arkady got interested in art at an early age; his father painted watercolors. The boy didn’t have the opportunity to visit galleries, however, he admiringly learned the reproductions of artworks that were published in the supplement to the popular magazine Niva and sold at the local stationery store. Arkady especially liked vivid landscapes by a painter who had a strange surname, Kuindzhi. It seemed to him Kuindzhi was a wizard.

In 1888, Rylov went to St. Petersburg. At first, he studied at Baron Stieglitz’s Central School for Technical Drawing. Having graduated, the young man entered the Imperial Academy of Arts. The very same Arkhip Kuindzhi taught there. Modest and hard-working, Arkady Rylov became one of his best pupils.

Is It Possible to Paint Wind?

In 1902, Rylov spent the summer not far from Vyatka. He lived alone in a small house. The artist recalled later about those weeks:

Birch trees were rustling under my windows all day long, quieting down only by the evening; the wide river was flowing; the vastness with lakes and forests was visible.

The artist craved to capture the cheerful rustle of the birches.

He quickly found the necessary spatial solution – extremely close foreground contrasting starkly against the distant background. Thanks to such a composition, the artist managed to deepen the space of the canvas. But how could he fill it with wind?

The unidirectional motion of the branches was an obvious trick; the artist needed to think of something else. Rylov made a few birch trunks thin and bent them a little, he painted a row of boats under tight sails. The artist “cut” the image to convey a feeling of evanescence…

Arkady Rylov has been working on his Green Noise for two years. 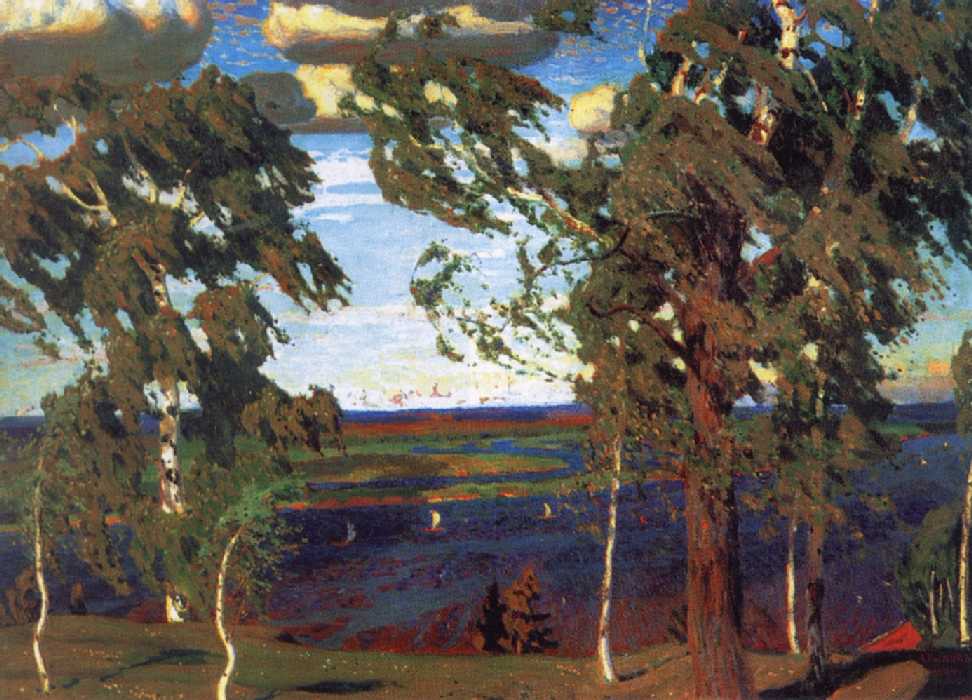 The artist showed the painting to Kuindzhi. The old master, who was usually stingy with compliments to students, praised him. The famous art patron Sergei Diaghilev took this landscape to his exhibition abroad, and European critics highly appreciated Rylov’s artwork.

In the Animal Kingdom

Since 1906, Arkady Rylov conducted animal-drawing classes in an art school.

By the standards of that time, Rylov’s method of teaching was innovative: his pupils depicted real animals instead of stuffed ones. The alive models didn’t tend to sit quietly, but their poses were always natural. The people who the artist taught made more progress than anyone who studied according to the old system.

Arkady Rylov brought cats, dogs, rabbits, and guinea pigs to the school. If the weather allowed drawing outdoors, the class drew horses in the yard.

The painter’s studio resembled a zoo. Working in nature, Rylov wasn’t able to walk past an ill animal or a wounded bird. He adopted seagulls, wrens, squirrels, even hares. The recovering pets lived in his studio without cages. When spring arrived, he released them.

A Dream of a Beautiful World

The Russian Revolution was approaching. It became difficult to make a living in St. Petersburg. Rylov painted custom-made landscapes for collectors to feed himself. The artist usually bartered his canvases:

One purchaser paid me for the painting The Weasel on the Stump with 30 pounds of flour and 20 pounds of sugar. For the big painting The Seagulls at Sunset I was offered and a sazhen of firewood and a goose.

The months before the Revolution was strange. Nobody understood exactly what would happen in the near future, but everybody realized that Russia would never be the same again. Rylov dedicated days to work; as for the evenings, he spent them listening to classical music (in spite of the atmosphere of disaster, concerts were being held). The artist also often visited the Hermitage as if to say farewell to it.

The situation climaxed in 1917 when Bolsheviks seized power. They promised to create a better, fairer world. Tired of uncertainty, many people willingly believed in the Soviet paradise. The country was still suffering from hunger and cold, but now it had a great purpose justifying all this madness. Arkady Rylov – by that time, a professor of the Academy of Arts – was among the intellectuals who supported the changes.

In 1918, the artist painted white birds flying over the sea:

The work is full of light and happiness. Look at this huge sky, these bright waves! It’s spring. The swans are returning to their homeland, and there is no reason why their journey could be interrupted.

Rylov expressed the sense of flight marvelously well. We see the birds from the position of a bird. The sky occupies almost the whole canvas. The stratus clouds highlight the main direction of the motion. The dominating blue color plays an important part: it is associated with the coolness of the air.

I love the painting, yet, you know… Every time I admire it I unpleasantly stumble over the ship, like it got in the “shot” too perfectly just for the occasion. Maybe the painter wanted to persuade himself that an ideal reality exists?

Arkady Rylov didn’t attempt to find favor in the eyes of the red functionaries, however, they welcomed his piece.

The artwork was proclaimed the first true Soviet landscape. The artist inadvertently saved his favorite genre: by accepting In the Blue Expanse, the Bolsheviks admitted that portraying nature is not a useless occupation.

For the next few years, Rylov trained a new generation of landscape artists.

The Academy, where he taught, was restructured into art workshops. The workshops were free; anybody could study there without any entrance exams. Not surprisingly, most of the students turned out to be completely unprepared. Tutors had to explain to the beginners the very foundations of art. There wasn’t any unified program of teaching; each tutor worked relying on their own standards. Rylov placed emphasis on informal communication with young painters. He not only demonstrated various techniques to his students and corrected their errors, but also arranged cozy gatherings with a samovar for his group.

Neither I nor You are Needed Nowadays

Reading the information about Arkady Rylov in an encyclopedia, you may find a phrase like, “in the 1930s, the artist fell into line with the propagandist ideas of socialism”.

Indeed, in his late years, Rylov painted some canvases on typical Soviet topics  – Lenin in Razliv (1934), Tractor at the logging works (1934), and Heavy-duty locomotive (1935). 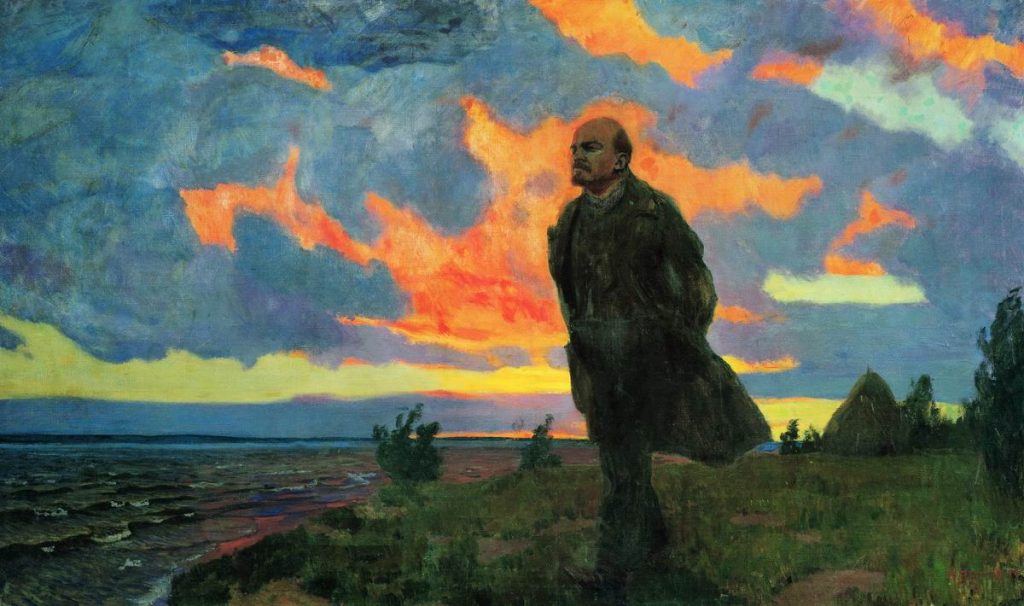 Why did Rylov turn to the proletarian themes? The artist attempted to accept the new life and find his own place in it. Some of his letters and memories of that time are soaked in the sense of bitter loneliness. He wrote to a friend (who was a landscape artist, too), “Of course, neither I nor you are needed nowadays. What to do…”

The personal exhibition organized for the artist’s 65th birthday didn’t bring him much joy. Rylov was self-conscious about his best works – those which were precious to him as “remembrances about happy moments”, as “a talk with nature”.

A form of emotional outlet for the aged artist was working on illustrations for children’s books and magazines. He contributed to the Chizh journal (1936) and illustrated Vitaly Bianky’s tales about animals (1936, 1937). 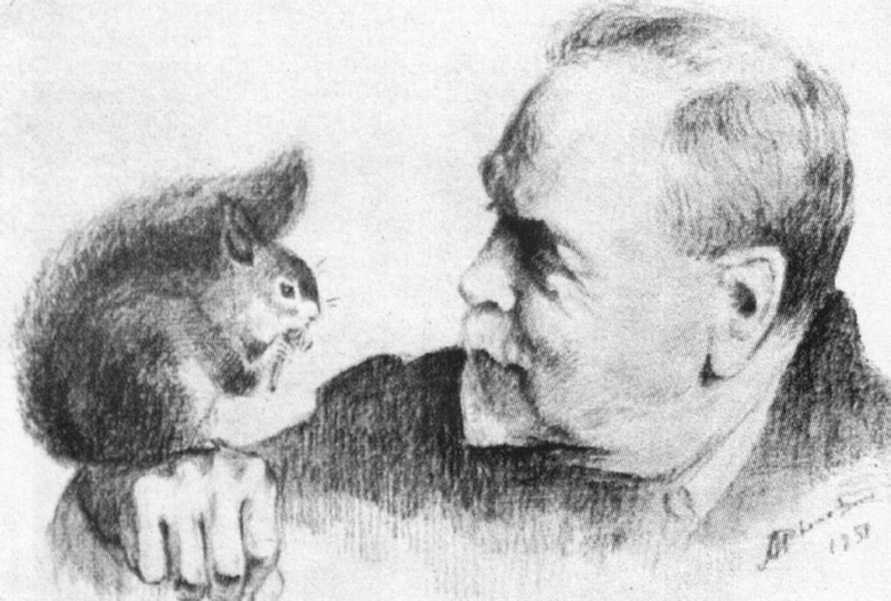 The modest self-portrait with a squirrel, which Arkady Rylov obviously drew just for himself, is lovely. The squirrel is sitting on the artist’s hand and isn’t afraid of him at all. he’s looking at the tiny defenseless creature respectfully.  For him, the squirrel isn’t a cute toy, but his equal. This drawing really can make the world a bit better place.