The master craftsman Daedalus, together with his son Icarus, lived in captivity on the island of Crete. Every ship that left the island was checked upon instructions from King Minos, so the father and son were forced to escape by air. Daedalus constructed two pairs of large wings from feathers and wax. He learned to use his invention himself, then showed Icarus how to do this.

The old master had warned the son not to soar either too low or too high lest the sea’s fog wet the feathers or the hot rays melt the wax, yet Icarus ignored Daedalus’s wise advice. He went high aloft and came very close to the scorching sun. As a result, his wings fell apart and the youth perished.

Belonging to the Earth

‘Don’t fly too close to the sun!’ we caution each other, hinting at the tragic ending of the myth of Icarus. The boy shouldn’t have been so reckless. If you need to achieve a goal, know your limits! Artists, though, sympathize with Icarus.

17th-century Flemish painter Jacob Peter Gowy represented the character of the sad myth as handsome and athletic as a Greek god. His French colleague Charles Paul Landon, who lived a century later, depicted the youth with golden hair and white wings, like an angel.

In the canvas by Croatian artist Vlaho Bukovac (1855-1922), Icarus is a weak human being evoking genuine compassion.

We can say almost nothing about the person whose body is spread-eagled on the rocky ground. It’s difficult to determine the age of the deceased; there are no clothes that would help us to link the setting of the painting to a particular country or time. The only details that clearly refer to the myth of Icarus are the feathers and sticks left over from the wings.

The Icarus’s body looks very realistic, the dark blood seems still hot. The ground appears hot, too. The artist very actively applies warm tones, replacing some cold tints with them. The grass which could be green turns out to be reddish, and the rocks take on a brownish color. Why does Bukovac do this?

He wants us to feel a longing for fresh air and the broad expanse  – the terrific broad expanse I recently described in the article about Arkady Rylov’s works.

We are beings of flesh that are destined to become earth; we aren’t supposed to own the sky. However, each of us has a soul that stubbornly yearns for the unknown and the unreachable. When man is obsessed with a dream, he or she forgets every “cannot”.

Daedalus didn’t perceive both the possibility of flight and the flight itself as something wonderful. The old master didn’t have the purity of heart that nourishes dreams. Daedalus ended up on Crete for a reason – he fled from home city to the court of Minos hoping to avoid the death penalty; the great inventor had killed a younger genius out of jealousy.

Icarus, unlike his father, has committed no sins that could make his soul impervious. Having got off the ground, the boy felt so happy, so free of earth bonds, that any the safety regulations lost their meaning for him. The boy rushed toward the bright sun.

Alas, the sun rejected Icarus, and the earth took back what belongs to it. It’s interesting that Bukovac’s Icarus is lying on the ground. In the original story, the youth fell into the sea.

Portraying a boy who flew too close to the sun, Vlaho Bukovac admires all the eccentrics who rejected to know their limits. Maybe he believes many artists are such weirdos as well. Instead of just creating nice landscapes or still lifes, these people search for the high truth and paint the pictures that normal customers would never hang on their bedroom walls.

If you look closely at the lower part of the work, you’ll see Bukovac’s signature. The painter applied deep red paint as if he signed the canvass with blood.

Many years ago, I collected feathers. I usually picked them up when walking in the children’s playground in front of our apartment building. They weren’t a rare find. Birds like seagulls and pigeons constantly flew around over the playground because of the open garbage containers located nearby.

I kept my feathers in a special cardboard box, quite a big one. I was sure: as soon as the box is full, I’ll have enough material to construct real human wings and fly up to heaven. Of course, my grand plan failed. It wasn’t so easy to outwit the laws of physics. I started to dream about traveling by plane – thank the people who invented planes! We really ought to be grateful to them…

The Montgolfier brothers successfully launched their hot air balloon long before Vlaho Bukovac was born. In the decade he painted his Icarus, enthusiasts from different countries were already testing the first models of gliders – apparently, the artist has heard about these flights. He may also have heard how some of the pioneers of aviation had died. 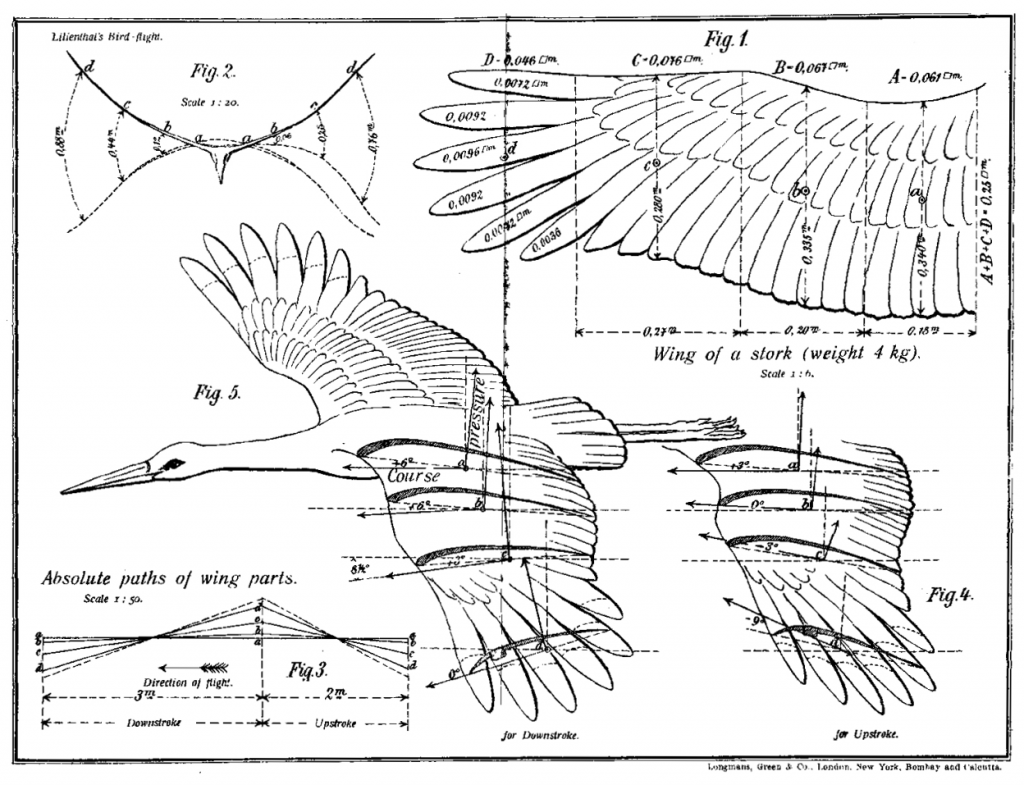 The picture above is a fragment of the book Birdflight as the Basis of Aviation written by Otto Lilienthal. This inventor developed a dozen models of monoplanes, two biplanes, and wing-flapping aircraft. While creating and testing his gliders, he thoroughly documented each promising observation. “With his fundamental research on birds and airfoils, he founded the science of wing aerodynamics,” it reads on the website of Otto Lilienthal museum.

On 9 August 1896, Lilienthal flew on one of his aircraft. Three flights were successful; during the fourth one, the glider stalled. The inventor didn’t manage to regain control and fell from about 50 ft (15 m). He broke his spine. Otto Lilienthal’s last words were “Sacrifices must be made.” (2)