You may have seen the ballet Giselle or heard of it, at least. Its main character is a peasant who, despite her frailty, loves to dance. Beautiful and pure-minded, she’s meant to be happy… A dreadful tragedy suddenly happens in her life and the poor girl goes mad from grief.

The great Russian ballerina Olga Spessivtseva literally became Giselle. But the ballerina, unlike the character,  lived through several fateful disasters.


From a Petersburg Orphanage to Paris Theaters

Olga Spessivtseva was born into a large family. Her father, a self-taught opera singer, died young and left his children destitute. Three of them, including Olga, were sent to a St. Petersburg orphanage with theatrical connections. The girl began studying at the Imperial Ballet Academy.

After graduating, the aspiring ballerina joined the Mariinsky Theater company. Olga was promoted to soloist in a short time.

In the same year when Spessivtseva performed her first solo parts, she took a tour abroad with Sergei Diaghilev’s Ballets Russes. Olga danced with the legendary Vaslav Nijinsky in Le Spectre de la Rose, Les Sylphides, and the “Bluebird pas de deux” from The Sleeping Beauty.

Here is this pretty woman in her early 20s. She is winning Paris. She believes that everything is ahead of her. 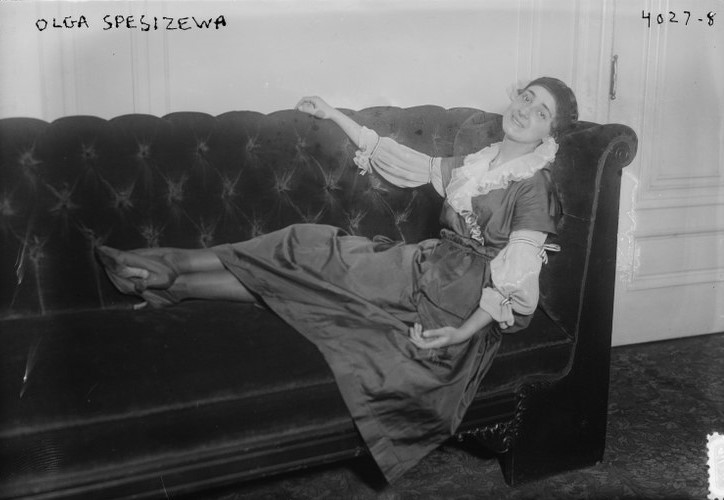 Alas, it’s 1917. The Revolution struck in Russia. The great empire was rapidly transforming into the Soviet Union. Devastation reigned in the country. Opera and ballet were under threat of elimination. Fortunately, the Minister of Education and the Arts, Anatoly Lunacharsky, was able to protect theaters; they retained separate classical performances of their repertoire.

Giselle in the Soviet Realities 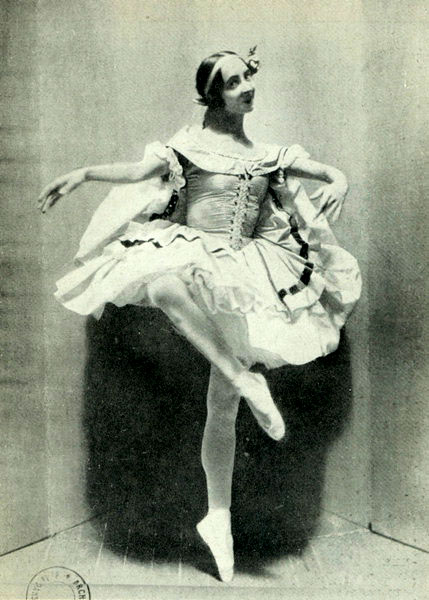 By 1918, many artists of the Mariinsky Theater emigrated. Olga Spessivtseva, on the contrary, returned to its scene. She had to do the work of two or maybe, four, leading ballerinas.

Olga learned one role after another – Aspicia, Esmeralda, Odette… and of course, Giselle.

Spessivtseva took this part very seriously. In order to play a plausible mad Giselle, she went to a home for people with mental illnesses, observed the patients, and adopted their gestures. Olga spent a lot of time training; an outstanding ballet teacher, Agrippina Vaganova, helped Spessivtseva to bring her technique to perfection.

Olga Spessivtseva embodied Giselle like nobody else. She was similar to this charming character – the same trustfulness, the same vulnerability. Her exquisite looks  – her big eyes, pale skin, and black hair – were ideal for the romantic role.

Not surprisingly, the ballet was a success.

Sadly, poor working conditions (sometimes the theater was not heated) and Olga’s physical exhaustion led to a disease: Spessivtseva contracted tuberculosis.  The ballerina interrupted her career for a while, however, in 1921 she could dance again.

She went on her second tour with Diaghilev’s ballet group; this time, to London. A bit later, the young star performed a few parts in his Buenos Aires programme.

Spessivtseva sincerely didn’t want to abandon her homeland, yet finally decided to emigrate. In 1924, Olga asked for permission to visit Italy for the purpose of medical treatment, and left Russia for the last time.

Spessivtseva accepted an invitation from the Grand Opera. In France, she also became a prima ballerina – an étoile. She continued to maintain her relationship with Diaghilev’s Ballet Russes as well. Such brilliant masters as George Balanchine and Bronislava Nijinska choreographed special ballets for her.

At the height of her fame, she made a historic guest appearance in Great Britain. Having arrived in London, Olga Spessivtseva danced Giselle with Anton Dolin of the Royal Ballet. Her performance set a benchmark for hundreds of ballerinas who would learn this role thereafter.

The ballerina Alisia Markova, who saw Spessivtseva’s performance from backstage, remembered that she worked selflessly. Here is only one example: when she needed to quickly put herself in order after Giselle’s mad scene and play the character in the image of a beautiful spirit, Olga dipped her disarrayed hair into a bucket of water. When I imagine how she danced with cold wet hair, I got goosebumps.

In 1934, Olga Spessivtseva went to Australia as a star of former Anna Pavlova’s troupe. Unaccustomed to the humid climate, the ballerina was often tired. She began showing signs of a mental illness.

An experienced dancer, Spessivtseva forgot the sequence of dance movements. She attempted to go far from the city without any reason –  Olga’s colleagues found her wandering along a deserted highway.

Olga more or less coped with her first nervous breakdown. In Europe, the great Giselle returned to performing and did some teaching.

The Second World War was about to start. Olga’s patron and lover, rich American Leonard Brown, persuade her that she should move to the USA. Yes, she had patrons; but don’t think Spessivtseva was a kept woman. My feeling is that she just needed a protector, a strong man next to her.

The uncertainty of living in a new place and quarrels with Brown disrupted Olga’s delicate psychic balance.

After a panic attack at her hotel room in New York, she was hospitalized.

The prima ballerina of the St. Petersburg Mariinsky Theater and the Paris Grand Opera turned into patient 360446 of a free mental hospital.

A Friend in Need

Spessivtseva had no acquaintances who could visit her in the United States. She didn’t speak English well enough to make contact with the staff. Years passed… the great ballerina’s life would probably have ended in loneliness and tortuous, clouded dreams, if a complete stranger had not come to help.

American dancer and dramatist Dail Fern was writing a play based on Vaslav Nijinsky’s diary notes. Reading the papers, the dramatist paid attention to a photograph of Spessivtseva performing Giselle and was immediately struck by this image.

Fern managed to find out what happened to the Russian Giselle. In spite of the fact that the enchanting woman from the photo was a person with a mental illness, Dail Fern met her. When he discovered how desperate Olga’s situation was, he decided to aid her.

The new friend brought a Russian-English phrasebook to Spessivtseva and showed the patient to a Russian-speaking doctor. Orthodox icons appeared in Olga’s room (she deeply believed in God). Fern not only came to see Spessivtseva from time to time, he also regularly sent her letters. Each of them finished with the words “With love, my friend Olga”.

Having received more than 3,000 (!) such letters from Fern, she fully recovered.

The ballerina spent 20 years in the asylum and was unable to return on the scene because of her ripe age.

Dail Fern drove her to the Tolstoy Farm – an accommodation created by the youngest daughter of Russian writer Leo Tolstoy for emigrants.

I’d like to show you a video – “Olga Spessivtzeva – a Tribute in Images and Film” by John Hall. This tribute is superior. Its author collected almost all the best existing visual materials that can tell us about Spessivtzeva’s destiny.

You will see some photos of the young graceful ballerina and a recording of an elegant old woman – the footage was captured on the Tolstoy Farm. The third part of the video is the historical Giselle’s mad scene (1932).

Spessivtzeva lived in the emigrant accommodation for three decades. There was a nice environment there. The residents communicated with each other in Olga’s first language. They practiced the main Orthodox rites and ate traditional Russian dishes. Olga enjoyed some hobbies – she sewed dolls, for example. The old ballerina wrote down dances and remembrances.

She had guests. Once, three dancers – Anton Dolin, Galina Ulanova, and Maris Liepa – went to her with a big bouquet of roses. She was so touched that started to cry.

Her cherished dream was to return to Russia. Maris Liepa, a Soviet dancer, tried to get the official permission which would give her the chance to return home. He even obtained the permission. But it was too late – by that time, Spessivtzeva had died.