Walking through Vologda, you’ll find the central square with ease: the orthodox “onion” domes of its church ensemble are visible from far away.

The gilded dome belongs to a pseudo-gothic belfry. It resembles a beautiful woman who wants to be liked. The slender belle willingly demonstrates its elegant lancet window, lacy balustrade, and fine clocks. The belfry was erected a century and a half ago.

Saint Sophia Cathedral, located nearby, is four centuries old. Its cupolas are silver, its walls have no decorations aside from simple pilaster strips, but what enormous power radiates from it!

A Monumental Temple for the Tsar

Thanks to its perfect proportions,  St. Sophia cathedral doesn’t seem very high. In fact, it is 60 meters tall; this temple is taller than the famous Leaning Tower of Pisa in Italy.

Such a big church was constructed in two years. The masters worked fast since they had nearly unlimited resources and a very demanding client: Ivan the Terrible himself supervised the project. 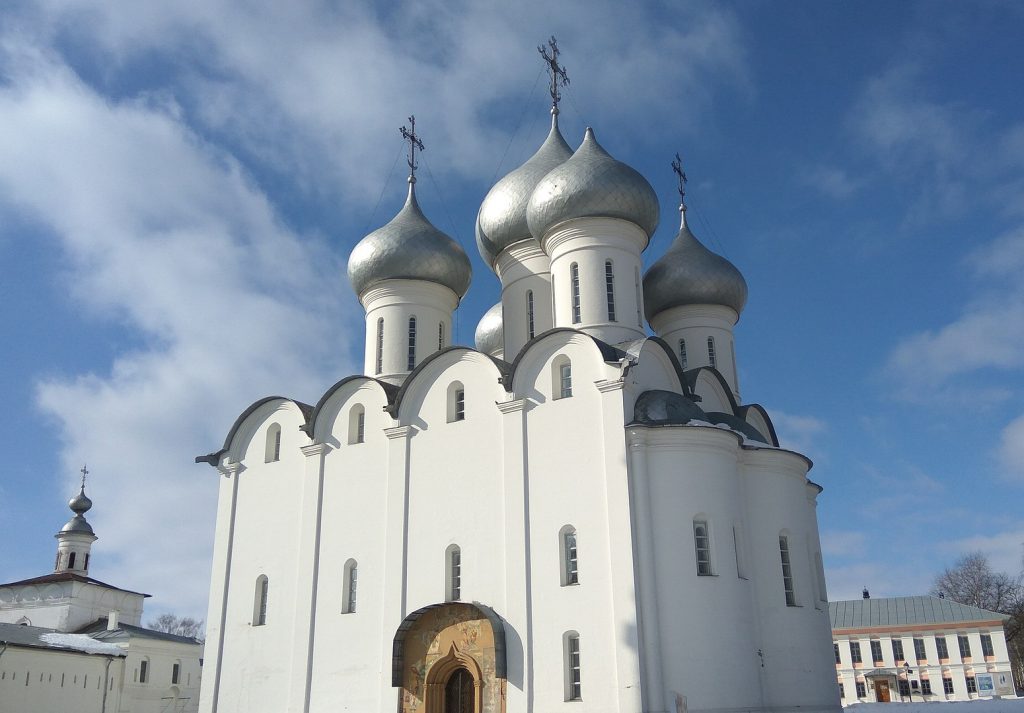 In the mid 16th century, Vologda became an important distribution point for Moscow’s trade with Holland and England. Ivan the Terrible included the perspective town in his private domain, the so-called oprichnina. He planned to turn Vologda into the capital of the oprichnina lands. The tsar needed a grand cathedral in his future residence.

The builders had been constructing the temple from 1568 to 1570. When the project was practically finished, Ivan the Terrible suddenly lost interest in its results. The tsar even gave the order to demolish the new church. Why?

According to a folk version of the story, Ivan was filled with hatred for the cathedral because of a serious personal cause: once, when he inspected the temple, a brick fell just on his head. I grew up in the Vologda region and often heard the story about the tsar and the brick; however, I never believed it was true.

Firstly, the tsar died 14 years after leaving Vologda (nobody could live so long time with a fractured skull); secondly, he had enough political reasons to change his plans. Moscow was attacked by the Crimean khan, Delvet-Girei, a plague epidemic raged in Russia… The subsequent disbanding of the oprichnina was the last factor that made Ivan the Terrible change his mind about the northern capital. 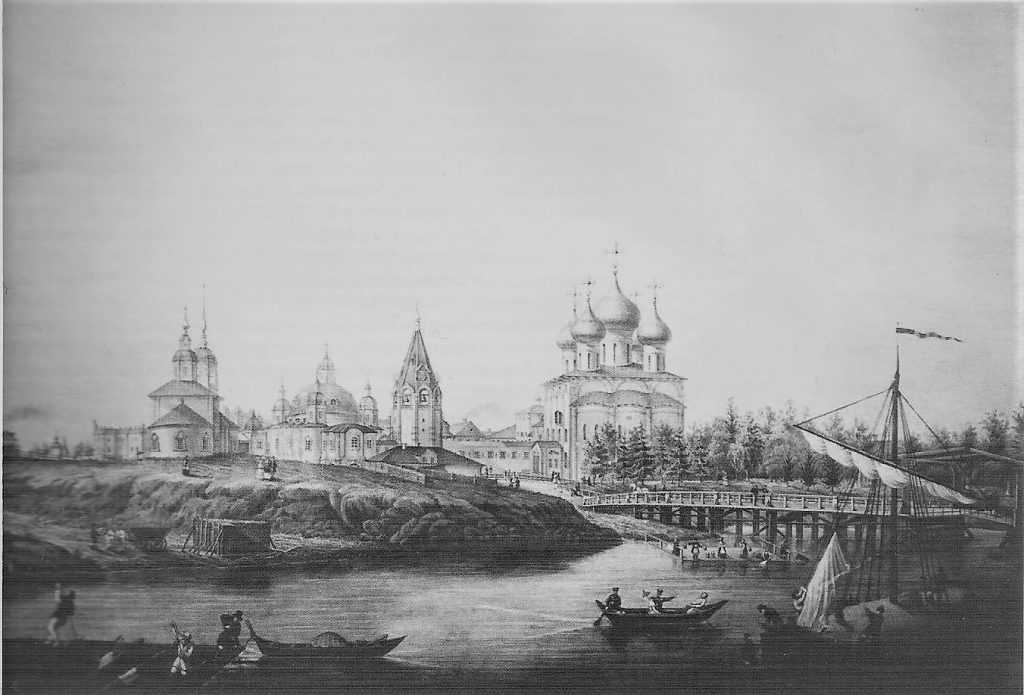 A view of Vologda churches. Engraving by A. Skino after drawing by A. Ushakov

Fortunately, Ivan canceled his order. The temple was completed during the reign of the tsar’s son, Feodor Ivanovich.

The Warm World of Old Frescoes

The outside of St. Sophia Cathedral is snow-white; the interior leaves you breathless with its colored frescoes. The cathedral hall is covered with them from top to bottom.

The Yaroslavl master Dmitry Plekhanov painted the temple (not alone, of course; thirty artists assisted him).

The manner in which they worked was typical for the 17th century, yet now it’s perceived as very original. The world of these wall paintings is warm and alive, despite telling us about suffering. The images of Jesus Christ and the saints only differ from the images of mere mortals by their halos. Almost all the figures are depicted in motion.

These frescoes are notable for their various background details. Look closely at this fragment – you’ll see buildings, a grove, and even separate flowers: 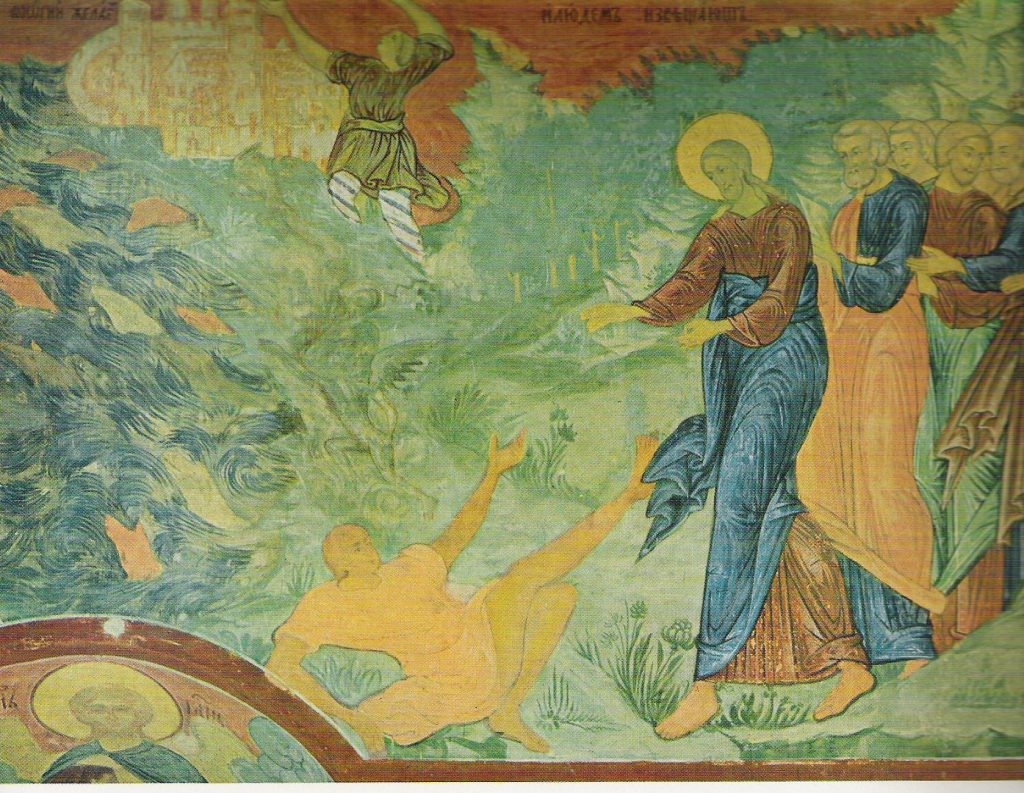 Narrow windows, located on the second and third levels of the cathedral, let in little sunshine, and the lowest part of the walls is much darker than the upper one.

Here is the link to “visit” the temple: https://sophia-vologda.ru/vtour/

The Past and the Present

St. Sophia Cathedral has been through a lot. It was badly damaged when Polish and Lithuanian forces attacked Vologda in 1612, it burnt several times.

Under the Soviet regime, the cathedral was repurposed. In the 1920s, a town museum placed in this orthodox temple an exhibition dedicated to the history of religion and atheism. The beautiful frescoes were hidden behind the portraits of famous people who didn’t believe in any gods and pictures demonstrating the Inquisition’s atrocities.

The portraits of atheists saved the cathedral, though. If the temple had served as a granary or a storehouse, its wall paintings wouldn’t have survived. 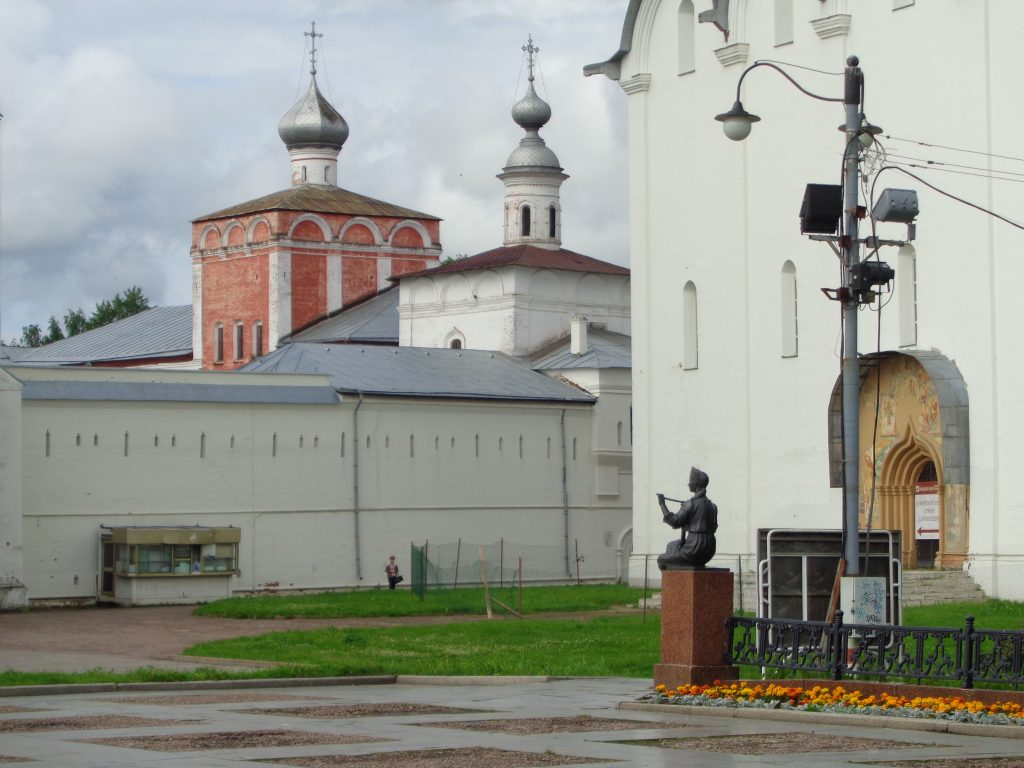 In the second half of the 20th century, St. Sophia Cathedral was already considered to be an estimable monument of architecture. Thanks to restorers, now it looks like it did in the distant past.

The cathedral is used jointly by the Vologda State Museum Preserve and the Vologda Eparchy of the Russian Orthodox Church.

On Christian holidays, divine services are held in it. In summer, hundreds of tourists cross its threshold and find themselves in the time of Ivan the Terrible. After visiting the cathedral, they usually take the chance to climb the belfry. 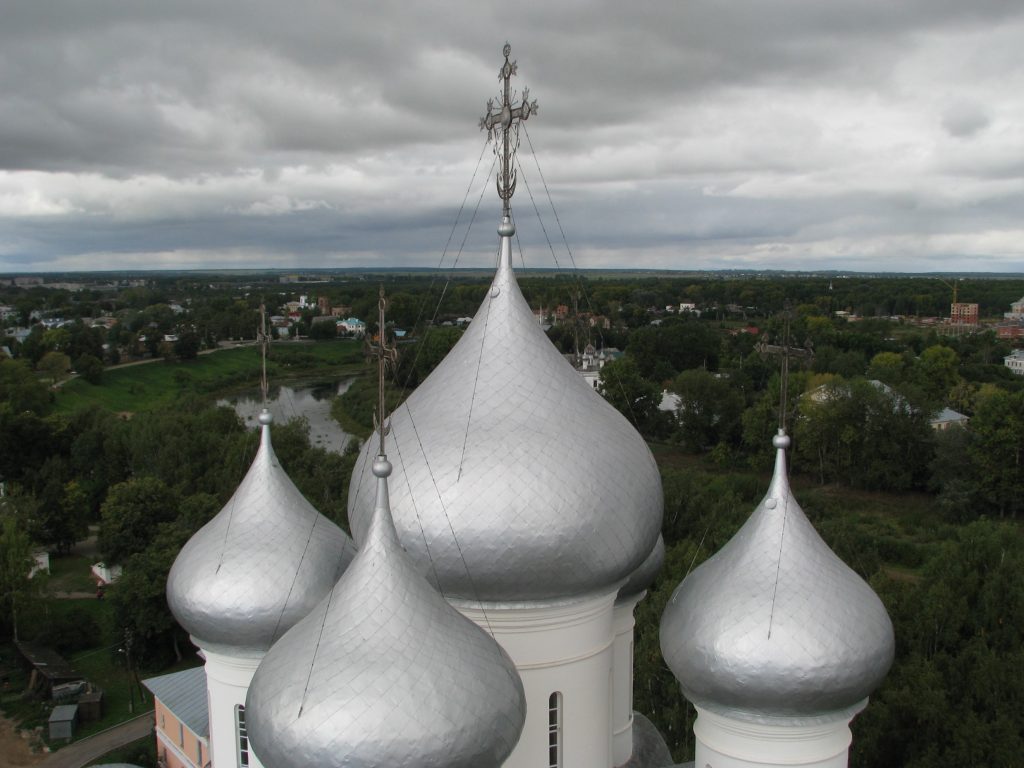 It’s a startling experience to glance at Vologda from St. Sophia Cathedral’s point of view: to the temple, modern multi-storey buildings are as tiny and fragile as the modest wooden houses of former Vologda.

The cathedral doesn’t see the potholes and knee-deep puddles, but knows everything about the boundless Russian vastness and huge sky.