Many tourists try to photograph of St. Vitus Cathedral in its entirety.

They squat, even lie on the ground, but to no avail: the grand building refuses to squeeze into a shot and become a Facebook story.

My journey to Prague was my first trip abroad. I followed our group’s guide everywhere, diligently constructing an endless list of Bohemian monarchs in my mind.

I remember standing in line next to Prague Castle. The day was sunny; groups arrived, one after another. An officer checked bags.

Two spires towered behind the wall…

Frankly speaking, I didn’t wish for a closer look: I’d heard such touristy places are usually brimming with pickpockets. However, after a few minutes, my purse no longer mattered, and I forgot honorable Bohemian kings’ names – and my own. 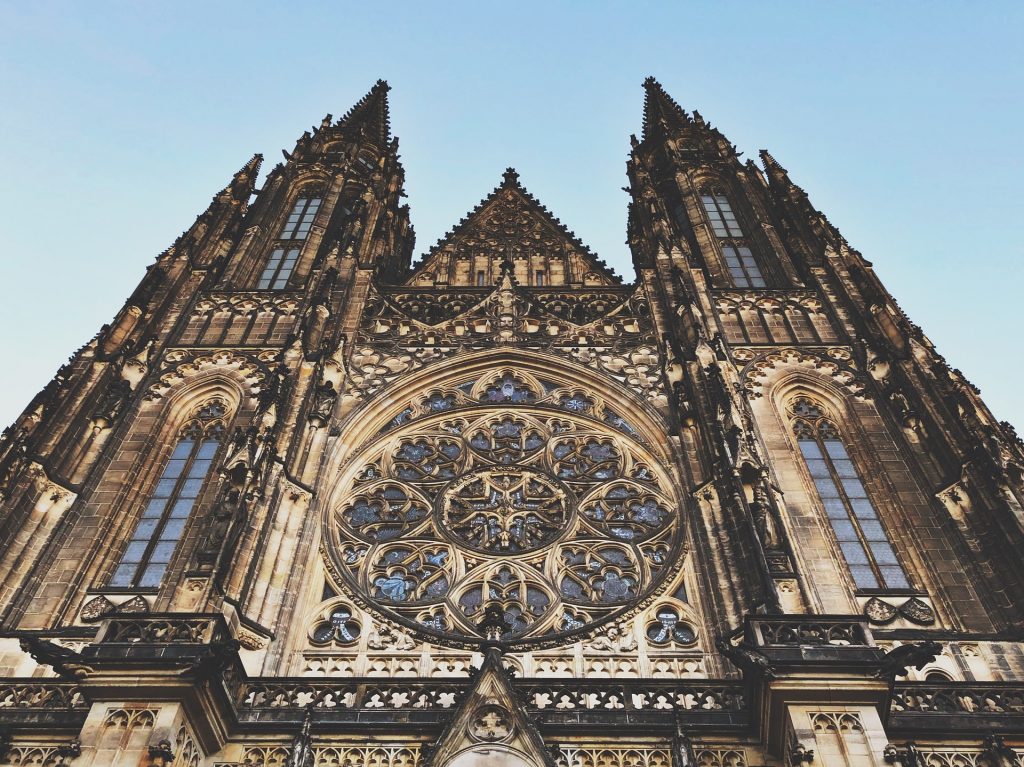 Use this link for the panoramic photography. Look at the cathedral. It’s a mighty and wise colossus.

Have you noticed the blackness of the walls? These scorch marks aren’t the result of a fire. They appeared because the cathedral is constructed of sandstone, which tends to darken over time.

The Birth of the Giant

The temple’s construction began in 1344, but we are mistaken to assume this colossus was born in the 14th century. It has been under construction for almost 600 years.

The master, who designed its overall layout, was a Matyáš of Arras. He worked following the aesthetic standards of the French late Gothic period: clear composition, slender verticality, rigid respect of proportions.

After implementing part of his plan, Matyáš died. The next master builder, young Peter Parléř, continued the work.

In contrast to his predecessor, who was schooled as a mathematician, Parléř was trained as a sculptor. He felt forms well and played with them.

Parléř invented his own vaulting system for the main nave. His vaults had double diagonal ribs (not single, as was customary in classic High Gothic). They strengthened and decorated the ceiling: space wasn’t divided into sections of the same type, and one’s gaze could slip along the intricate ornament toward the altar with ease. 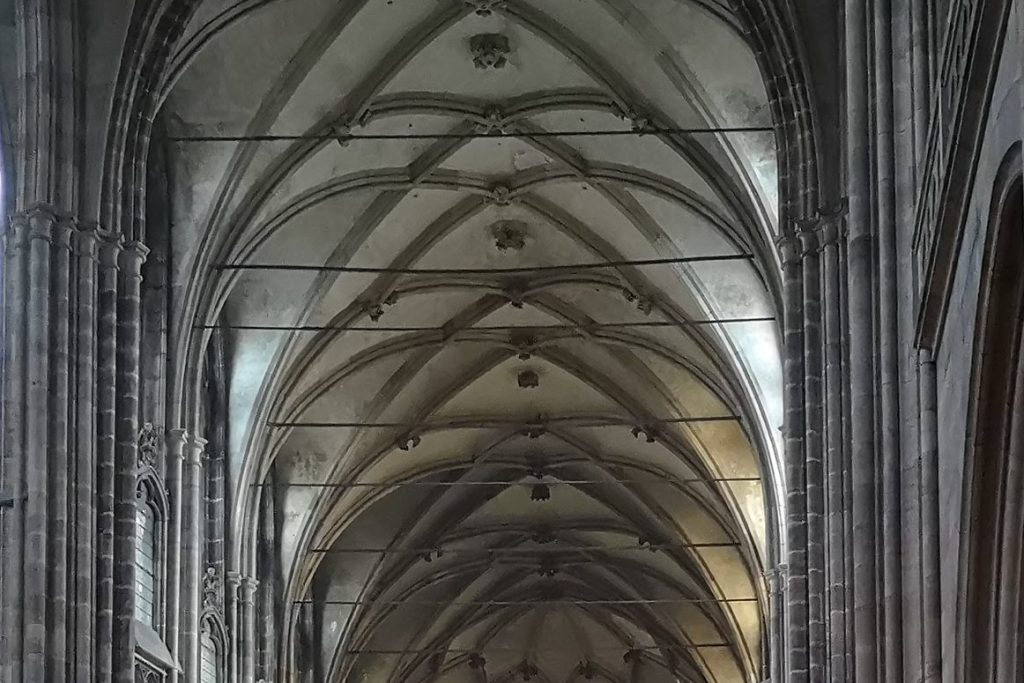 His other bold idea was placing a gallery of busts in the cathedral. The busts depicted faces of saints, bishops, kings – and master builders – including Peter Parléř himself (you probably know that artists were considered to be mere craftsmen in the Middle Ages).

At the time of his death, the architect had built the choir chapels and the triforium. He left the tower and transept unfinished – his sons, and in turn, master Petrilk, a member of Parléř’s workshop, completed those jobs.

Alas, history intervened in the matter: construction ceased because of the Hussite Wars.

The cathedral remained half-built for centuries, with seven unsuccessful attempts to complete it during the Renaissance and the Baroque periods. These efforts introduced inorganic elements to the Gothic temple’s image of the Gothic temple that did more harm than good.

Finally, in the Romantic era, a few enthusiasts focused on completing the cathedral in the Neo-Gothic style. This was what the temple had been waiting for! 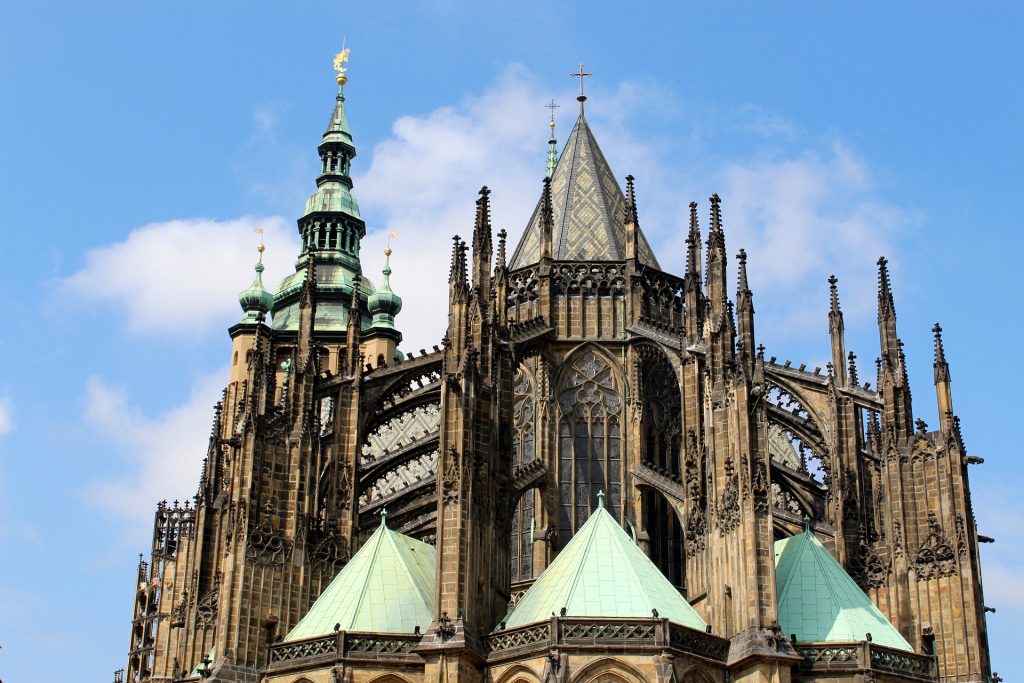 In 1844, “Union for Completion of the Cathedral of St. Vitus in Prague” was created.  Josef Kranner led the project. He had to pay close attention to preparatory work – repairing the old building and removing Baroque decorations.

After Kramer’s death, Josef Mocker designed the west façade in a typical Gothic style and laid the new nave. But even he was unable to put the dot at the end of this long story. The final “parent”  of the building was Kamil Hilbert.

I’ve mentioned almost all the architects! Are you still reading my post?

Don worry, I am not going to name the sculptors and artists, who were involved in the creation of the wonder called Saint Vitus Cathedral.

Imagine you’re in front of the western façade of the cathedral. You’re admiring the lacy rose window, the beautiful bronze doors, the intricate wall ornaments – and suddenly, you make eye-contact with a gargoyle! The cathedral’s gargoyles are incredibly ghoulish. 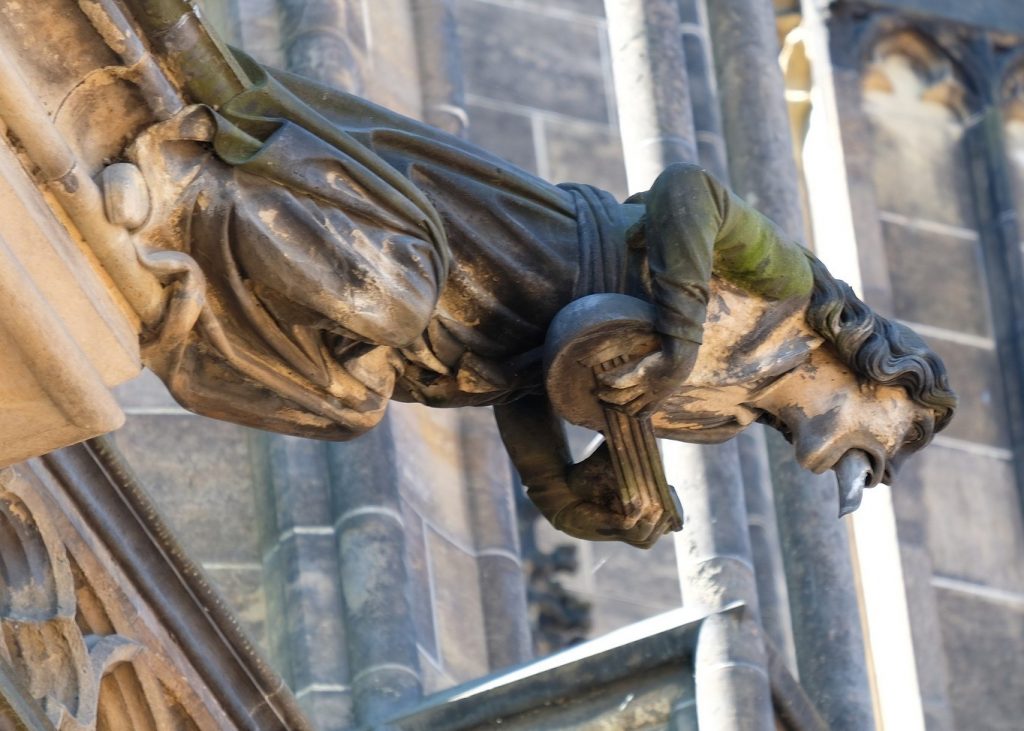 Their task is to terrify demons daring to approach the temple: a demon is believed to be frightened of its own image.

Additionally, the gargoyles remind believers of their sins. The bas-relief above the portal serves the same purpose.

We see not just Jesus Christ on a cross, but the scene of the crucifixion. Two thieves, crucified with the son of God, direct their stares to the Savior. Guards maintain order. Women cry.

You feel as if you’re among the passive witnesses to the cruel, unjust execution. Why is no one trying to prevent the crime? Be honest with yourself, and you’ll answer the question. 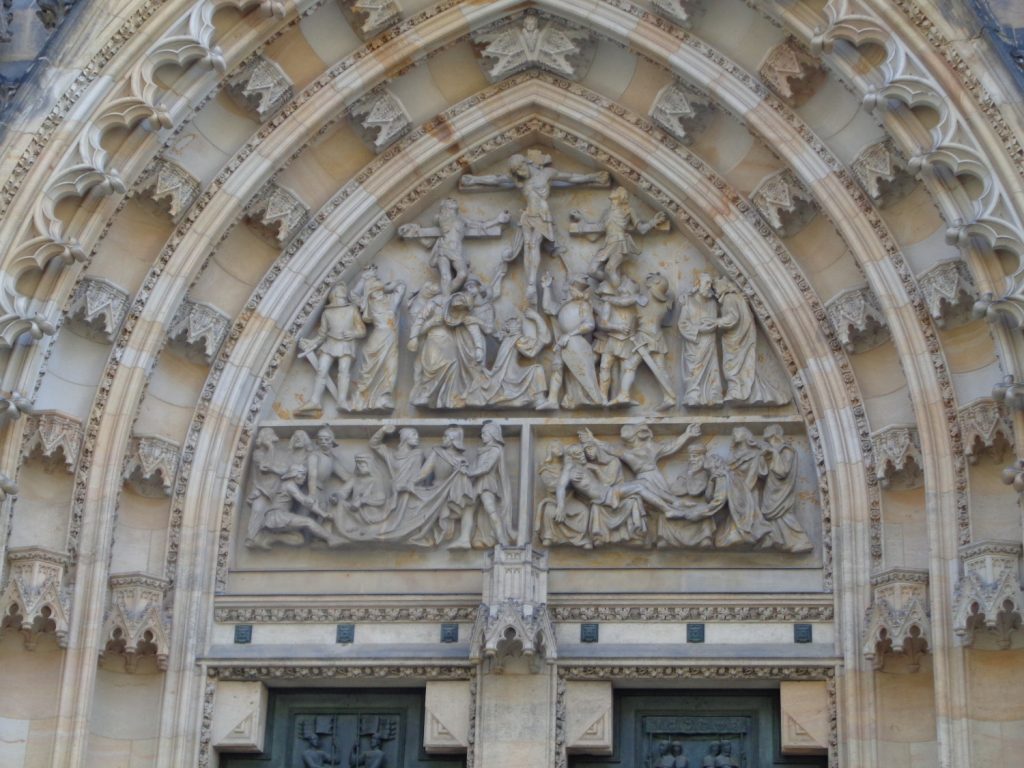 Let’s cross the threshold (use this link for the virtual tour).

The interior of the building is solemn. Mosaics color the light, making it mystical; narrow pointed arches soar skyward.

Kings and emperors, saints and archbishops are buried here. We don’t know for sure who among them was righteous and who weren’t, but each of them attempted to change the world. 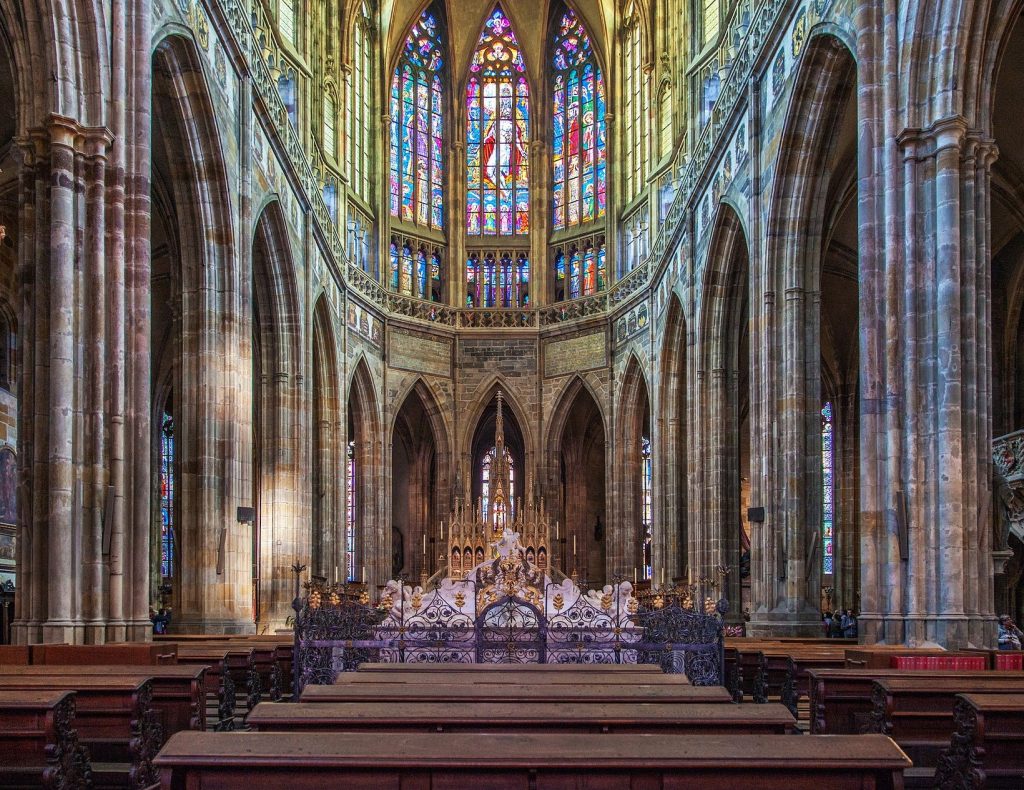 The chapel, where the relics of St. Wenceslas are kept, is the most mysterious place in the cathedral. Visitors usually only catch a glimpse through the entrance.

There’s a little door in a corner of the room. If we had the necessary keys, we could enter the Coronation chamber, which stores a collection of church treasures – crown jewels, a scepter, and an orb…

St. Vitus Cathedral has its own voice. The temple can speak, aided by bells.

The temple can speak by the aid of bells. The main bell, Zikmund, is enormous – it’s as heavy as two hefty elephants. Zikmund needs four ringers, and very strong ones.

The cathedral also sings; its organ has quite a gentle tone.  An international organ festival is regularly held in the temple.  Maybe you’ll listen to the instrument live someday.

If you visit Prague, find an opportune moment to listen to St.Vitus Cathedral’s silence as well.

In the late afternoon or in inclement weather, the giant is almost alone. It will be glad to reminisce in the company of a welcomed guest.

The Tempodrom – From a Usual Tent to a Concrete One

The Panthéon in Paris: for What Purpose was it Built and Why does It Look like This?