A man came to fill his water pitcher and saw a venomous serpent drinking from the trough. In his place, many people just would kill the snake or quickly take a few steps back and not risk it – the uninvited guest would disappear in a minute. After that, they’d forget such an insignificant incident forever.

But this man was a poet.

David Herbert Lawrence’s Snake is quite a long poem. Listen to the work.

The setting of the poem is Sicily. Lawrence and his wife, Frieda, lived there about the time when he created his Snake. They spent two years on the island, from March 1920 to February 1922; Snake was published in his collection titled Birds, Beasts and Flowers in 1923.

The Englishman Lawrence went abroad not by choice.

In the autumn of 1917, local police officers arrived with a search warrant at his home in Cornwall, England. In the nervous atmosphere of the First World War, Lawrence’s wife fell under suspicion of espionage – probably because of her German heritage (1). The couple was told to leave the country.

D.H.Lawrence also had some troubles with the authorities. A bit earlier – in 1915, to be more precise – he faced official persecution in connection with the misrepresentation of his novel The Rainbow. It was banned because the author wrote frankly about sexual instinct as a significant natural force of life. The unsold copies of the book were confiscated and burnt. This definitely helped Lawrence to say goodbye to his motherland.

A period of wandering and temporary residences began for the family. These difficult years gave Lawrence good food for thought.

Living near “smoking Etna”, he significantly deepened his outlook on natural forces. His updated philosophy was brightly expressed in Snake.

From the first lines of the poem, we find ourselves in an extremely real, material world. It demands almost all the speaker’s senses. It’s a “hot, hot day”, the dark carob tree “smells strange”. The “yellow-brown”, “earth-brown, earth-golden” snake “reached down from a fissure in the earth-wall in the gloom”.

There isn’t work only for the sense of taste and hearing. What about the former? That’s ok – people apply it on an as-needed basis, yet the latter…  The poet doesn’t mention any sounds; otherwise, he emphasizes that the viper appeared “in quiet” and is drinking “silently”. 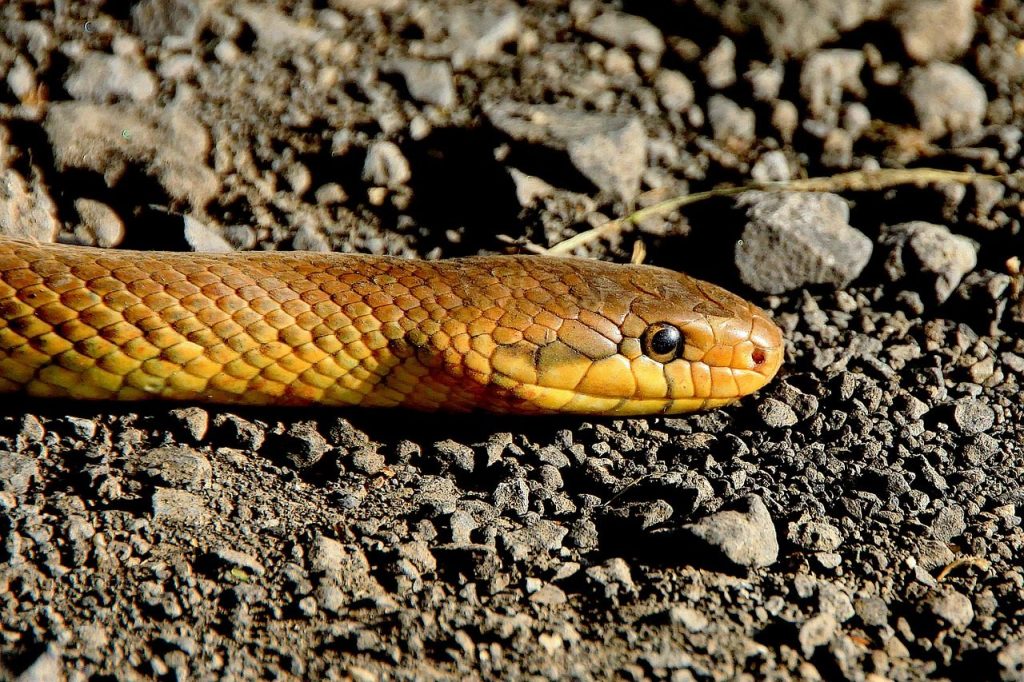 The speaker is deaf to the voice of nature – he’s focused on his inner dialogue too much. The rational part of his consciousness persistently claims that golden snakes on Sicily are people’s enemies: “The voice of my education said to me he must be killed”, “If you were a man you would take a stick and break him now, and finish him off”, “And yet those voices: if you were not afraid, you would kill him!”

However, something in the speaker’s mind protests. The man admires the regal visitor from the burning bowels of the earth. He feels honored that the viper should seek his hospitality.

The narrator is completely at a loss. We understand his feelings very well – while the soft moves of the snake are enchanting him, the author is hypnotizing us.

Snake‘s form perfectly matches its content. Lawrence uses free verse. The absence of a specific rhyme pattern allows him not to break the text into fragments of the same type.

The long sentences wriggle like a serpent; the line endings flowing on into the next line without a grammatical pause:

He reached down from a fissure in the earth-wall in the gloom
And trailed his yellow-brown slackness soft-bellied down, over
the edge of the stone trough
And rested his throat upon the stone bottom,
And where the water had dripped from the tap, in a small clearness,
He sipped with his straight mouth,
Softly drank through his straight gums, into his slack long body,
Silently.

Eight lines and only one full stop!

Numerous repetitions on different levels of the language contribute to creating the mesmerizing effect too. The author repeats expressive sounds (for example, “sssh” in the second stanza – “strange-scented shade”), key words ( “hot”, “black”, “voices”, “king”) and phrases (“as cattle do”), reproduce the structure of the most important sentences (“Was it cowardice, that I dared not kill him? Was it perversity, that I longed to talk to him? Was it humility, to feel so honored?”).

The plot of the poem develops slowly. The speaker is so disorientated that he cannot quickly make a meaningful decision. When the snake is going to slide back into the “horrid black hole”, the man attempts to do something:

I picked up a clumsy log
And threw it at the water-trough with a clatter.

Here it is, the first sound! The clatter, terribly inappropriate for the world around the narrator, brings him out of the trance. He starts to believe his own senses.

The regal snake is slithering away “in undignified haste”. By humiliating the “golden-earth” king, the man humiliated himself.

He curses the voices of education that had been telling him to hurl the log at the snake. Now, the speaker appeals to poetical knowledge:

And I thought of the albatross,
And I wished he would come back, my snake.

Of course, he recalls the albatross from the famous Samuel Taylor Coleridge’s poem The Rime of the Ancient Mariner. In the poem, the sailor shot an innocent white bird “that made the breeze to blow”. As a result, all the crew members of the ship were cursed.

The Serpent within Us

Have you noted the speaker at the end of the poem says “my snake”? He’d like the mysterious guest to belong to him. On a certain level of the text, the snake is indeed a part of his personality. It represents the unconscious.

About three years prior to Snake, D.H. Lawrence wrote the philosophical essay The Reality of Peace, and The Individual Consciousness vs. the Social Conscious­ness. He reasoned that each human being has the “blood-self” – natural instincts, spontaneous feelings.

We are afraid of our instincts and repress them, but this isn’t always good for us. Sometimes they could guide our actions much better than intellect. Man should seek harmony between the “blood-self” and rationality. “I must make peace with the serpent (…) within me”, stated Lawrence (2). That metaphor perhaps foreshadowed the birth of the poem Snake.

The poem turned out to be more enigmatic (and far more popular) than the essay. Literary scholars love to analyze Snake. They read it as an embodiment of ecological ethic principles (3), find in it the inverted Edenic myth (4); some of them think Lawrence’s viper is a phallic symbol.

And you know, they all are right in a way. Each poem causing a big bang in our minds becomes an expanding universe.