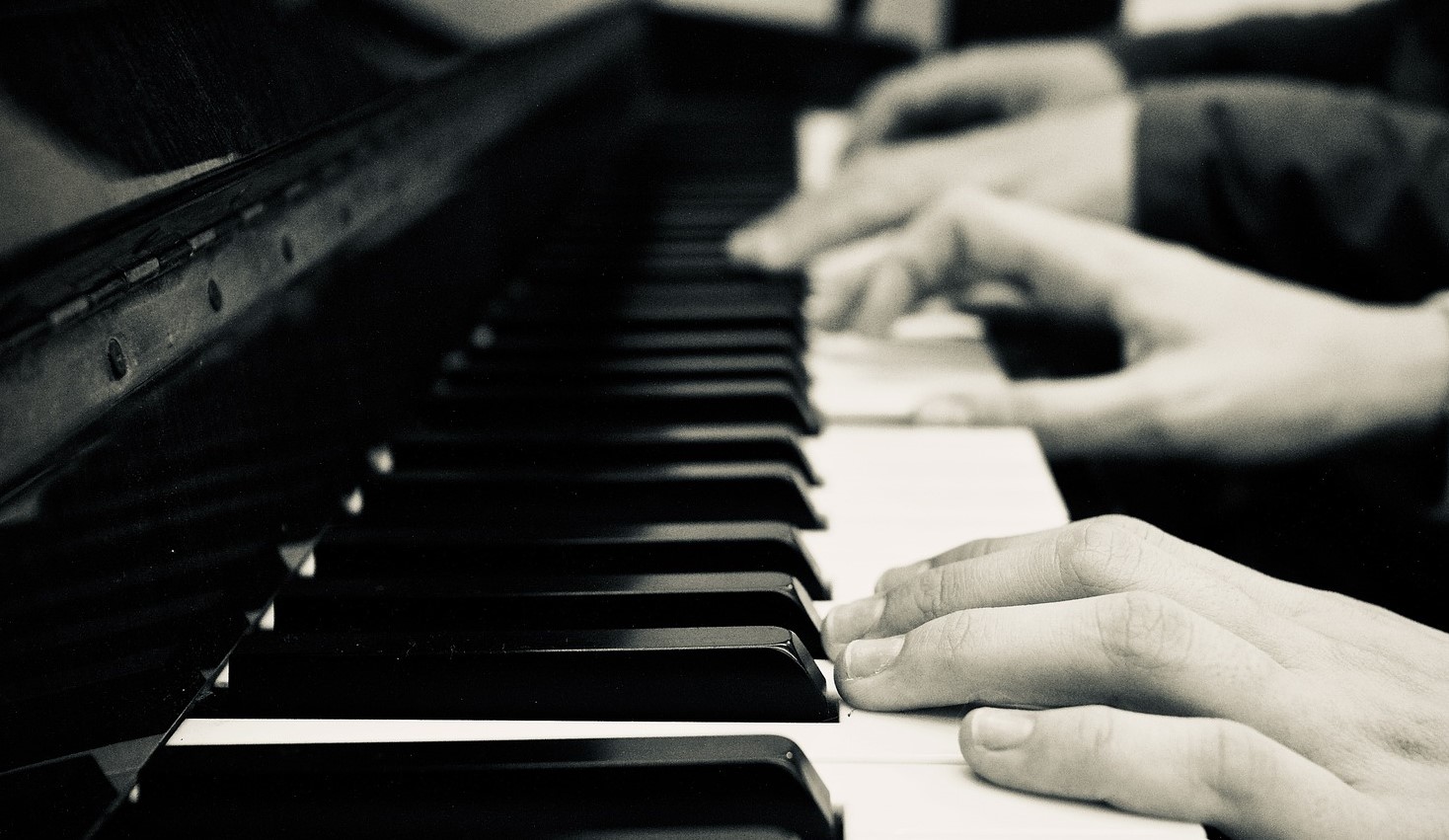 Schubert in Love: the Fantasia in F minor for Pianoforte Duet, D.940

By Natalia UsanovaNovember 23, 2020No Comments

Franz Schubert wasn’t blessed with happy love. The composer twice experienced deep affection for women who were above him in social status. One of them returned his feelings, yet they couldn’t marry; another treated him as a friendly acquaintance.

Schubert’s personal misfortunes are good luck for us. Were he a bit happier, we would have never heard his peerless Fantasia in F minor.

A Heart of Gold

In 1814, the Lichtental parish church intended to celebrate its centenary. Franz Schubert, who lived next to the church and had received his initial musical training there, was asked to compose a mass for the forthcoming event. He wrote the mass — his first work in this genre — within a few months.

The piece premiered solemnly, with more than sixty performers. The girl who sang the prominent solo was Schubert’s neighbor, Therese Grob.

The composer’s love for Therese may have been kindled exactly during the creating of his Mass №1: it’s believed he designed the main solo purposely to showcase her beautiful voice.

Talking to his friend Anselm Hüttenbrenner, Franz Schubert described Therese Grob and their relationship in the following way:

She was not exactly pretty and her face had pock-marks; but she had a heart, a heart of gold. For three years she hoped I would marry her; but I could not find a position which would have provided for us both. She then bowed to her parents.

Hüttenbrenner made a little mistake. When Schubert fell in love with Therese, her father had died. The girl’s destiny was probably defined by her mother.

Apparently, the woman, running the family silk-weaving business alone, wanted Therese to be free from unpleasant thoughts about livelihood. Or, perhaps, Franz Schubert himself refused to conform to bourgeois standards for marriage’s sake…

There is a popular opinion that Schubert was misunderstood in his lifetime. Actually, he did gain recognition, but just within small circles of connoisseurs.

The composer performed his pieces at informal gatherings that were held in private homes, at so-called “Schubertiades”. Here is how Moritz von Schwind, a member of the Schubert circle, depicted such an evening: 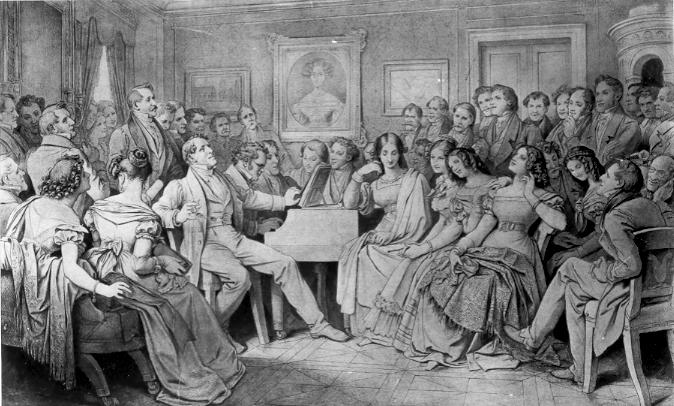 A Schubert Evening at the Home of Josef von Spaun

Moritz von Schwind drew the maestro accompanying the singer, Johann Michael Vogl. The room is crowded; ladies and gentlemen appear enchanted with the music. Pay attention to the portrait on the back wall. The noblewoman in the portrait is a real person – Countess Caroline Esterházy de Galántha. She became the second muse to Franz Schubert.

It wasn’t immediate love. In 1818, Schubert went to the Esterházy family’s summer residence located at Zseliz (Hungary): the head of the family engaged him to give lessons of music to Caroline and her sister. Franz had already turned 19; Caroline was 13.

Schubert was delighted with that job. The composer didn’t need to teach at his father’s school any longer and deal with math or other subjects he found boring; he could earn money doing what he really liked.

The young man not only gave lessons to the girls (who were, incidentally, quite capable pianists), but also enthusiastically composed, on the Count’s request and just for pleasure. All the Esterházys were musical; they willingly sang entertaining their guests.

In the summer six years later, Franz Schubert returned to the Esterházy estate. Caroline had become a charming beauty. Writing a letter to Schwind, he mentioned “the certain attractive star” from Zseliz. Schubert was head over heels in love with his pupil. As for Caroline, she admired the composer’s talent; however, a romantic relationship with him was for her out of the question.

In addition to his lessons there, he [Schubert] also visited the Count’s home, from time to time, under the aegis of his patron, the singer Vogl. […] On such occasions Schubert was quite content to take a back seat, to remain quietly by the side of his adored pupil, and to thrust love’s arrow ever deeper into his heart.

Once, the countess jokingly reproached Schubert for having created no work in her honor. He answered, “What is the point? Everything is dedicated to you anyway”.

In the last year of his life, 1828, Franz Schubert did dedicate one piece to Caroline Esterházy – the Fantasia in F minor for pianoforte duet.

My feeling is that Schubert expressed in the Fantasia all the unrequited love he had ever experienced – for Caroline, for Therese, and, perhaps, for somebody else. 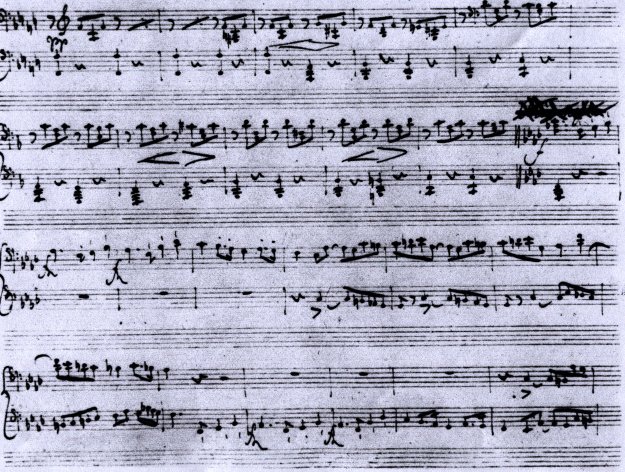 The manuscript of the Fantasia in F minor

The composition consists of four interconnected movements.  The piece opens with a beautiful lyrical theme; it sets the tone for the entire work. Great tenderness and immense readiness for self-devotion permeate the music.

In words, this eternal theme was conveyed best by the Russian poet Alexander Pushkin. Here is the beginning of his famous poem, translated by Henry Lowenfeld:

I loved you once, and still, perhaps, love’s yearning
Within my soul has not quite burned away.
But may it nevermore you be concerning;
I would not wish you sad in any way.

The dramatic tension is provided thanks to the contrast between light and darkness: the soft primary melody is replaced with a turbulent, fitful theme of desperation several times, yet returns – again and again.

We almost see the man shaking his head in a torturous attempt to throw off the strange obsession that he can’t get rid of: a new warm wave of fondness is swamping his soul.

By the moment he created the Fantasia in F minor, Franz Schubert had been through the mill. The composer used to visit notorious nightspots together with his Bohemian friends; as a result, he contracted syphilis.

This nasty disease wasn’t the reason for his death (Schubert died later of typhoid fever), but caused him a lot of pain, both physically and mentally. He had been living in isolation, hiding from the whole world, for a long time.

Suffering didn’t harden his heart… He still could write music. And what tender music!

On Wednesday March 26th, 1828, Franz Schubert gave his only concert for a large audience. The composer planned to include his brilliant Fantasia in the program but changed his mind.

It’s more than likely that Caroline Esterházy has played or at least listened to the piece, dedicated to her, after Schubert’s death. She wasn’t happy in love either. The Countess married quite late, in 38. The couple soon separated.