“No one feels another’s grief, no one understands another’s joy. People imagine they can reach one another. In reality, they only pass each other by”, said Franz Schubert said once. There is a bitter truth in his words, isn’t there?

It’s winter. Dogs are growling. Beyond a village, an old hurdy-gurdy man is tottering back and forth, barefoot on the ice. He is playing as well as he can. No one wants to listen to his simple music, no one looks at him. His little plate, intended for coins, remains empty. The old man just lets it go on, everything, as it will. He is turning the wheel of the instrument again and again.

Suddenly a listener appears next to him. The listener is young and handsome in his own way, yet he is tired and poorly dressed. The youth is asking (or maybe thinking):

Should I go with you?

When I sing my songs,

Will you play your hurdy-gurdy to them?

I retold The Hurdy-Gurdy Man () by Schubert above since it’s usually performed in German. Here is one of the best modern performances of the piece; Ian Bostridge sings it:

What can we learn about the two miserable characters of Der Leiermann?

The Hurdy-Gurdy Man is the last song of Schubert’s cycle named Winter Journey (Winterreise). The composer wrote it to the words by the German lyric poet Wilhelm Müller. Both Müller and Schubert were people of the Romantic era. Not surprisingly, their protagonist resembles a typical Romantic character; the image of a sensitive young man cruelly suffering from the world’s imperfection.

At the beginning of the cycle, the man leaves the house where his beloved lives, and where he had been living himself for a while – perhaps as a private tutor. The girl “talked about love, the mother of marriage”, yet something went wrong.

The youth walks out into snow and darkness. Up to the very last song, no important events happen to him; the heartbroken wanderer is just going towards an unknown destination and expressing his feelings in songs. The real disasters strike within the young man’s soul, though. “He experiences a cascade of emotions – loss, grief, anger, and acute loneliness, shot through with only fleeting moments of hope”, Bostridge writes (Bostridge is a talented singer but also a brilliant interpreter of German lieder, and the author of the book Schubert’s Winter Journey – Anatomy of an Obsession) (1).

The Old Man Playing the Hurdy-Gurdy

We are more or less acquainted with the central character of the whole cycle. Who is the musician from Der Leiermann?

The hurdy-gurdy, a primitive music instrument that does not require any special skills from the performer, was traditionally associated with the disabled. Müller and Schubert’s character may be similar to the blind beggar depicted in the famous painting The Hurdy-Gurdy Player, by Georges de La Tour: 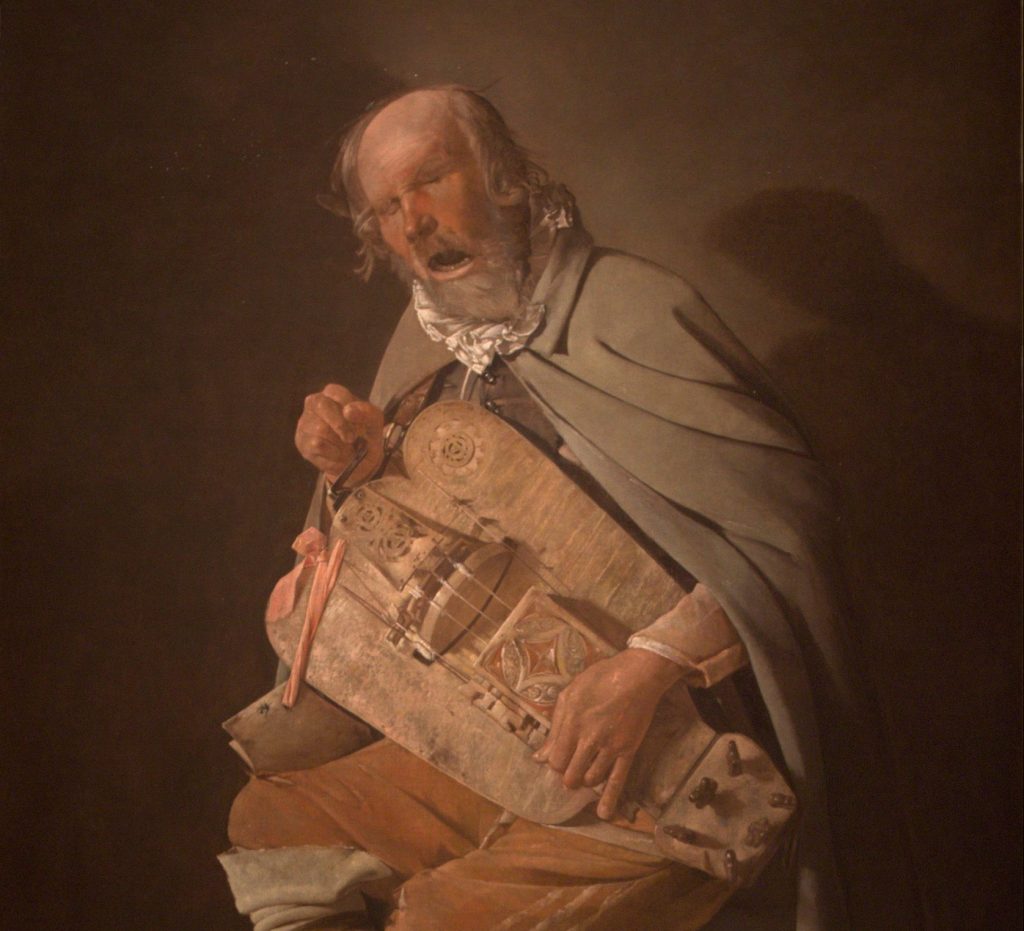 Even if our hurdy-gurdy man from the song is sighted, he’s already lost everything he could cherish. The organ grinder behaves irrationally – he continues to play notwithstanding the awful weather and the lack of passers-by. Only the despaired behave in this manner.

When we hear the narrator has shown compassion to the pitiful old man, we rejoice: humankind isn’t hopeless! There’s always somebody who feels another’s woe!

Is this the main idea of the song? Not necessarily.

True masterpieces often have hidden meanings; Der Leiermann is no exception. Many musicologists interpret the figure of the derelict street musician who never stops cranking his hurdy-gurdy as an embodiment of death itself. It is ready to take the young wanderer. That being the case, his “Should I go with you? Will you play your hurdy-gurdy to my songs?” sounds especially strong.

Poor Music From The Great Composer

Schubert started to work at Winter Journey in the penultimate year of his life. After contracting syphilis and being aware of the likely prognosis, he realized how it is to be an outcast standing a few steps from death.

The music he wrote to Müller’s words perfectly captures that torrent of the protagonist’s emotions. The piano supplies incredibly rich effects in the imagery of the poems.

In Der Leiermann, the pianist obviously imitates a hurdy-gurdy’s sound, droning and monotonous. The fact that the melody turns out to be harmonically impoverished doesn’t bother the composer.”It is utterly appropriate to give the wretched old hurdy-gurdy man “poor music”, Bostridge explains (1). The truth is more important than beauty.

The final of the song is open. The “strange old fellow” gives no answer to the wanderer’s questions; the music is fading away into the frozen wasteland. We’ll never know whether the old musician will play his grinding hurdy-gurdy to the young man’s sad songs. If that had happened, the result might be the following:

Eerie, haunting music… I am not sure if you will like it, but I am pretty sure you’ll remember it.