By Natalia UsanovaDecember 22, 2020No Comments

The two pudgy angels — at the end of December, we see them everywhere: on calendars and organizers, on wrapping paper and greeting cards. These bonny infants are so serious! They don’t look like children enjoying the Christmas bustle…

Let’s return the winged babies to their proper place — the great canvas, The Sistine Madonna, painted by the Italian artist Raphael in the 16th century.

In the picture, the pensive angels — putti, to be more accurate — are leaning on a parapet that serves as a border between the human reality and the heavens. Behind the putti’s backs, the Virgin Mary with the Christ child is floating on clouds. An old man and a young woman are frozen in adoring postures.

Raphael grouped all the figures together in the form of a pyramid; its apex turned out to be at the level of the Madonna’s unearthly face. Half-opened thick curtains in the corners of the canvas make the composition balanced. 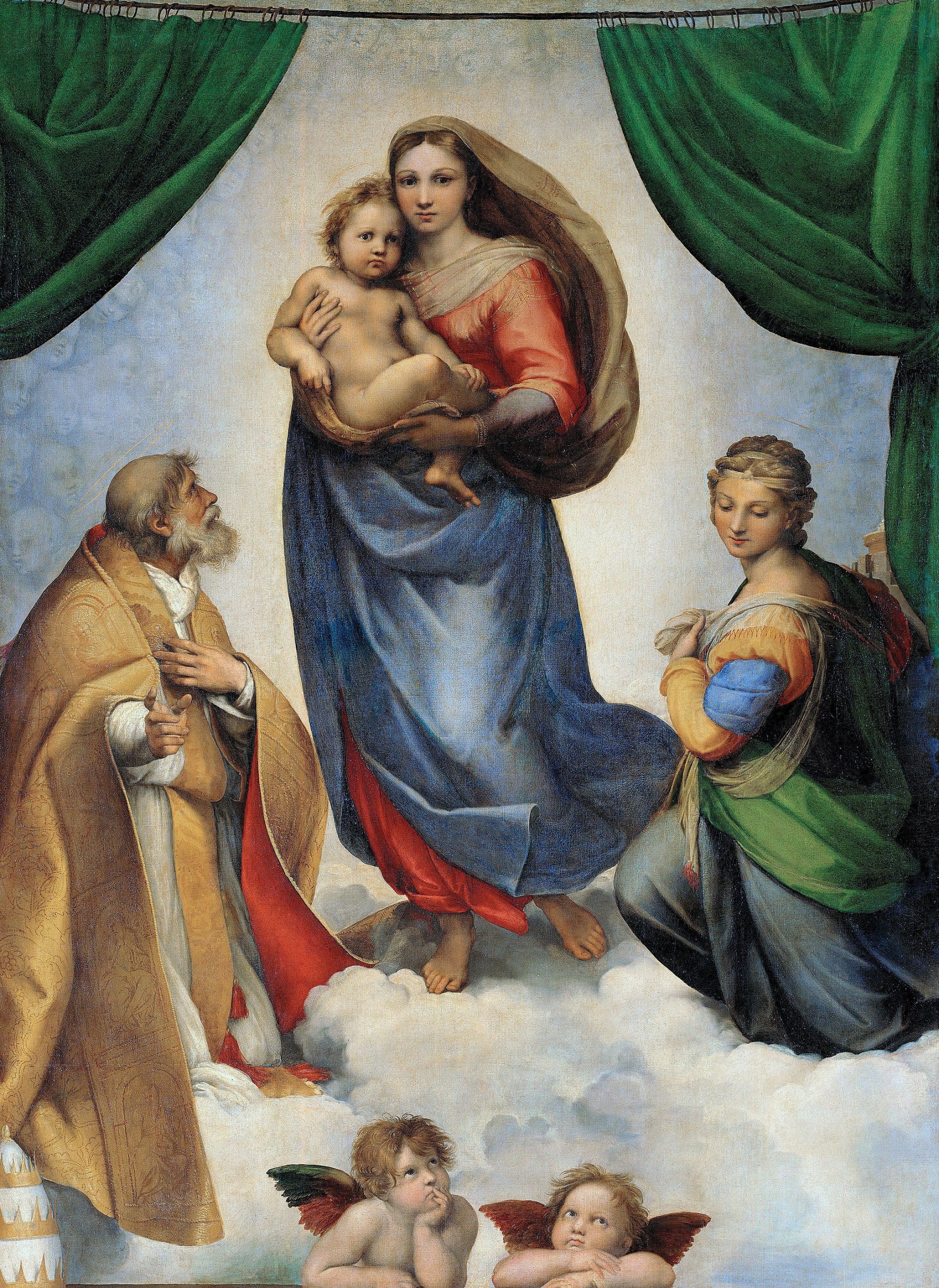 Unifying the elements of the picture, the curtains highlight the uniqueness of the depicted moment at once: we get an opportunity to witness what isn’t meant for our glances.

“A celestial vision of passing sublimity” — in such words, J. I. Mombert, the author of a book about The Sistine Madonna, aptly described the miracle created by Raphael (1).

Of course, the kneeling people, standing at the Virgin’s left and right, are saints. But who exactly they are?

The man is the martyred Pope Sixtus II. He has the honour of greeting the mother of Jesus Christ for reasons not directly related to the main idea of the artwork: Raphael painted The Sistine Madonna as a commissioned altarpiece for the Benedictine cloister of San Sisto in Piacenza. The order came from Julius II – the Pope for whom Raphael worked at that time (2). Julius II patronized this monastery.

Apparently, the sumptuous tiara emerged on the canvas upon the Pope’s request too. The acorn, decorating its top, was an element of his family’s coat of arms. Raphael treated the tiara in a very smart way: he reverently painted the symbol of power in the foreground; however, he deposited it on the parapet, outside the space occupied by the heavenly scene.

Looking in awe at the Virgin, Sixtus is pointing his finger at us, as if he is aware of our presence and recommending us for the favour of the Madonna. The painter makes the spectator not only a witness to the miracle, but also an invisible character of his masterwork.

Pay attention to the building above Saint Barbara’s shoulder. It’s her attribute.

According to the legend, she was the daughter of a rich pagan named Dioscorus. The father carefully guarded the daughter and kept her locked in a tower. During the time of her imprisonment, she became a Christian. When Dioscorus discovered that Barbara had converted to Christianity, he beat her, then attempted to starve her. She held true to her faith. Finally, the enraged father took Barbara to the prefect of the province. After being cruelly tortured, the martyr was executed. Dioscorus himself carried out the death sentence.

Saint Barbara is looking down at the two cute putti. I may be mistaken, but I’d suggest that she is thinking about maternal love. Despite Barbara never having been a mother, she, being a woman, realizes how excruciating the Virgin Mary’s sacrifice is.

We understand the emotions of Sixtus and Barbara to some extent, whereas the inner state of the sacred figures remains a mystery to us.

The Virgin Mary and her Divine Son

The Sistine Madonna is very youthful and transcendently beautiful.

Her eyes, resembling bottomless pools, fascinate us. The terrific effect is achieved by the aid of a very simple trick: the artist darkened the irises so that they would almost merge the black pupils into each other. The Virgin Mother isn’t crying. No tears can relieve her heartache.

The Christ baby sits in his mother’s arms as if on the heavenly throne. His right hand seems ready to be stretched over the sinful human world for a blessing.

The eyes of the child “clothed with every attribute of infant loveliness” (1) appear completely adult. They glitter – maybe from fear? The Saviour will have to overcome his partly human nature and endure inhuman suffering…

The gentle breeze is moving the garments of the Madonna holding the baby Jesus. The Virgin Mary is approaching. She is bringing her only son to us, people, though she already knows that we’ll kill him.

The sacred figures are surrounded by a halo of innumerable angels – the air is full of divine grace.

…Talking of angels, why do our two putti not look at the wonder that’s happening just next to them?The babies don’t need to see the Madonna to feel her omnipresence because they are innocent and close to the heavens. “The kingdom of God belongs to such as these”,  the Bible says. You and I — we can also try to change ourselves and become like children.