I’ll tell you about Purvītis and his Latvia. It’s also mine to some extent; I’ve been living here for almost three years.

Winters in this little country are relatively mild. During the season, the snow can cover the ground and melt several times, so it doesn’t have the chance to get banked up in large dirty piles.

Vilhelms Purvītis just loved the snow. Even if a day promised to be rather cold, he went out to a grove or to a river and worked and worked for hours, with passion. Once he was painting on the ice; it started to break up. Engrossed in his work, Purvītis only noticed that something was wrong when the ice floe had already started drifting towards the sea.

A winter landscape, unlike a summer one, cannot be monotonous. Summer leaves remain green whether or not it is cloudy. But the snow is always changing in tone. I know it might seem strange, but snow usually isn’t white.

Just gaze at the lower right-hand corner of the picture. You’ll see a soft bluish color. 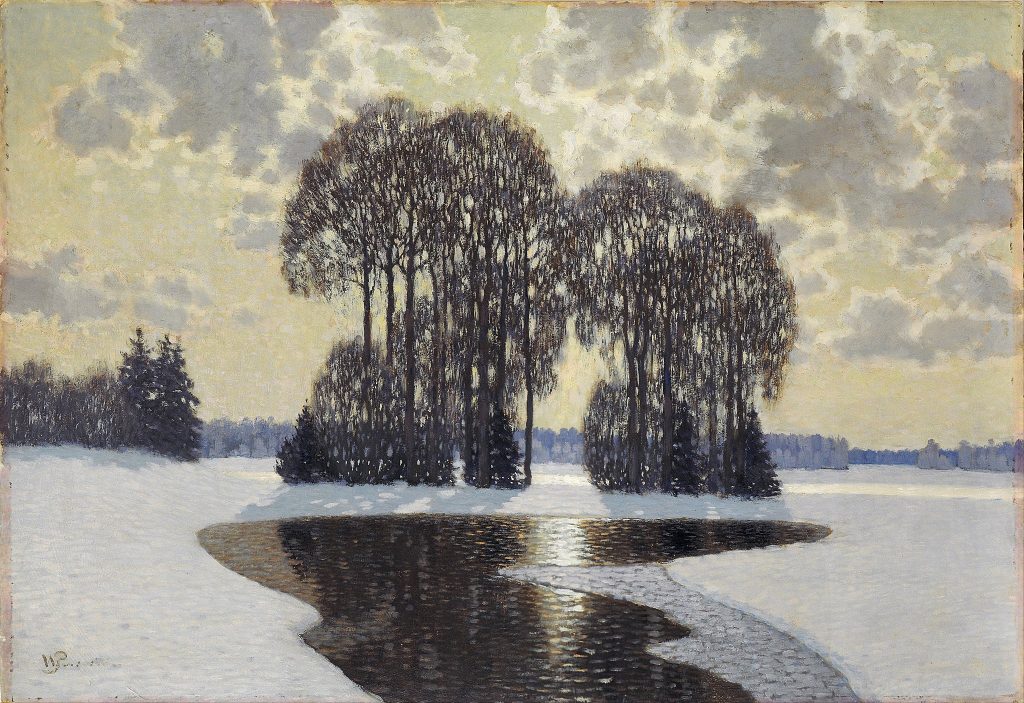 In the sun, the snow might be creamy yellow. A bit later, before sunset, it could become pink and purple.

You have been looking carefully at this painting by Vilhelms Purvītis. Now try to listen to this painting. Winter is full of music.

At first, the music is flowing smoothly, a bit heavily; the dark water, bounded by the winding lakeside, contrasts with the light snow. The main tune reaches its climax – the black trees straighten their lacy branches up to the heavens. The heavy tune of the water is intertwined with the majestic melody of the sky.

Fine details capture your attention. The small vibrant strokes on the water are quivering. The snow begins to vibrate, as well.

What is there, next to the horizon? A shiny, sonorous strip of light! The sun is so close…

Suddenly it breaks through the cloud and the whole of the huge shiny sky comes rushing towards you. 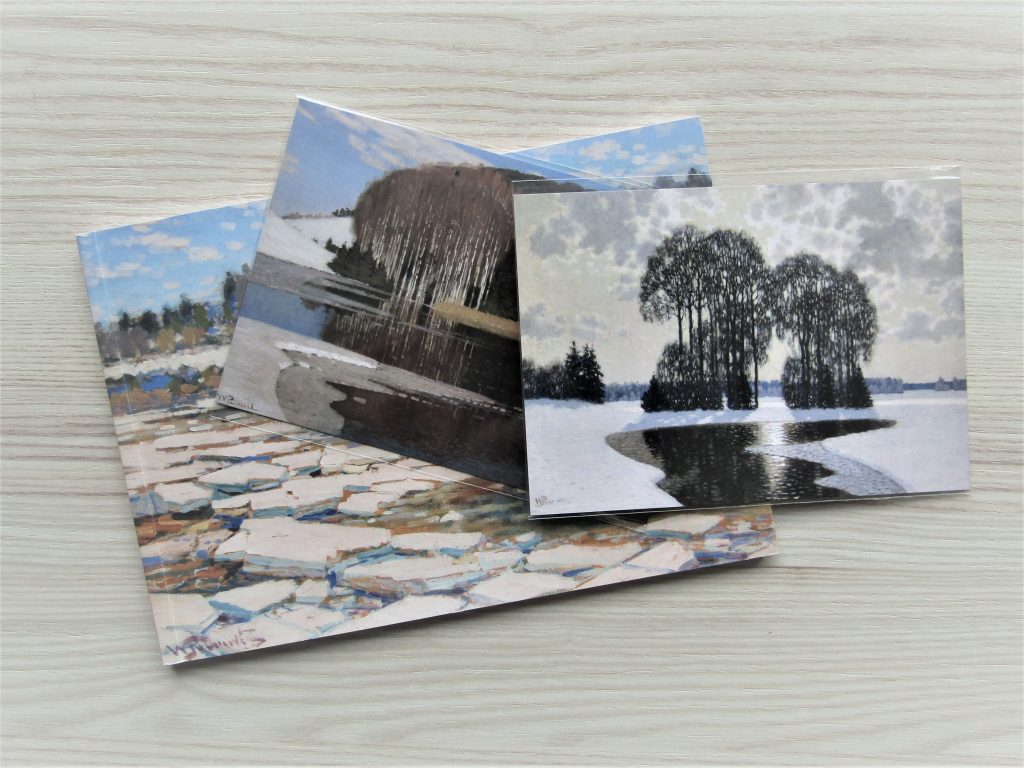 Fortune smiled on Winter by Purvītis. At first, it served as a decoration in the millionaire Emilija Benjamin’s apartment.  She was a businesswoman, a patroness of talented Latvian artists, actors and journalists.

Unlike Emilija Benjamin, the painting survived the 1940s and the entire Soviet period. In 1988, Winter was donated to the National Museum of Art by Benjamin’s heirs.

The work has traveled a lot. It has been presented at exhibitions in Brussels, Rome, Kaunas, Moscow, Tallinn, Luxembourg, and Kyiv.

The museum still owns this wonderful landscape for both Latvians and foreign visitors to admire.

Was Vilhelms Purvītis as lucky as his painting? I wouldn’t say that. Everything good in his life happened thanks to his own efforts, not by chance.

Purvītis graduated from the Saint Petersburg Academy of Arts in 1897. By that time, post-impressionism and Art Nouveau were thriving in Europe; expressionism, cubism, and many other -isms were on their way…

In Latvia, truly national painting had not existed at all. The intellectual elite of the country consisted of Baltic Germans whereas the Latvians were peasants.

Together with two of his contemporaries, Janis Rozentāls and Johans Valters, Purvītis had to create everything from scratch.

If you think that Latvian peasantry welcomed these young, well-educated artists with open arms, you’re mistaken. The style of their first works – not so radical as a matter of fact – seemed too rude to their compatriots.

Valters moved to German and became an expressionist.

Janis Rozentāls stayed in his native country and tried his hand at different styles, different genres. He gradually accustomed the public to modern art. In time, Rozentāls gained recognition as a classic Latvian artist.

Purvītis also devoted the most part of his life to Latvia. He painted hundreds of sublimely peaceful  Latvian landscapes.

Being an even-tempered person, Vilhelms Purvītis often took responsibility for practical matters related to fledgling national art. This artist was the founder and the first rector of the newly established Academy of Art. He also became the director of the Art Museum in Riga.

Nowadays there is a prestigious biannual award for gifted Latvian artists, worth 28,500 euros, named after Purvītis.

Was Edgar Degas a Misogynist or not?

Claude Monet and his “Impression”: The Story of How a Young Artist Became a Founder of a New Art Movement

Eight Interpretations of One Motif: Different Versions of Munch’s “The Scream”